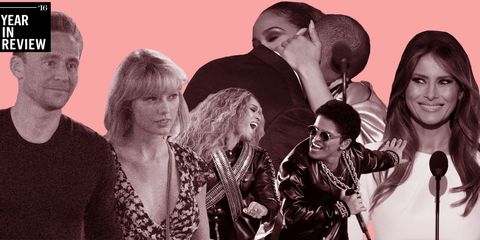 Lots to digest, and so little time to do it. Here, based on an arbitrary value system that has been informed by the fact that I have been covering this sort of news the entire year so I pretty much know what I'm talking about, the 10 most 2016 pop-culture moments of 2016, ranked from least impactful (but that's the "pop" bit, isn't it?) to most.

2 Britney Returns to the VMAs

Not exactly underwhelming, not exactly overwhelming—just whelming. Her long-awaited, first post-"Gimme More" VMAs performance did, however, reflect this year's preoccupation with reliving the past, which, given the near future, is like, "Yeah, duh."

More nostalgia. More unresolved debates. More feels (so many). Perhaps more thinking about if Hollywood doggedly hanging on to the reboot train like a 1920s hobo is truly necessary.

4 Drake Gets the Girl

Then promptly loses her (or not? unclear), but whatever—for a brief, shining moment, anyone who has ever pined from afar or been "benched," as the youths call it, got the resolution you, uh, lovelorn folk hardly ever get the satisfaction of indirectly feeling. It was so public! So epic. The real-life reenactment of "NOW KISS." It was good while it lasted or still lasts, TBD.

5 Melania Trump Is a Speech Plagiarist

Oy. Given the developments that followed, this is now slightly less funny but still good for memes, because in times like these, playing variations on a few broadly known themes is how we deal. We also write think pieces about her particular brand of womanhood and how it's okay or not okay to mock her. But this is the one event we keep going back to.

Although it was *technically* and somewhat LOL-ably headlined by Coldplay and Bruno Mars was there too, it was Beyoncé's show, which can be said of most of 2016. She performed "Formation" for the first time, announced the accompanying tour, dropped her visual album Lemonade, and left BeckyGate unscathed while the rest of the parties allegedly involved—and not involved at all, poor Rachael Ray—limped away with metaphorical eyepatches and crutches aplenty. This was the year Beyoncéproved she could flawlessly do anything, and it all started here. More on this later.

Or is immolated, if you prefer. On the long, long list of People Who Could Have Had a Better Year, TSwift comes out ahead of even those college kids who think about death and term papers all the time, for the following reasons: The messy end of a relationship. The end of another relationship. Kim Kardashian with the receipts. Public opinion turning against her. Unrepentant overuse of the snake emoji. How will she shake, shake it off? Because this isn't a question of "if."

8 Brangelina Is No More
Getty Images

Their divorce = #actuallybroketheinternet. What was it that affected us so deeply? That once upon a time, the Brangie Bunch were so glossily, classily happy? That truly nothing is as it seems in this hieroglyphic world? THAT THERE WILL NEVER BE ANOTHER CAMELOT, AS NATALIE PORTMAN SAYS? Because as soon as the split was announced, it got ugly: news of the confrontation, a child abuse investigation against Brad while Angelina filed for primary physical custody of their six children. Recent updates reveal that the family is working with a family trauma specialist to help them heal, but this split is far from over. RIP Brangelina, 2004-2016.

Think about the event itself: In early October, Kim Kardashian West was robbed of more than $10 million worth of jewelry in Paris. Then think about the tumbling dominoes that came after: the morbid rubbernecking around the details. Kanye interrupting "Heartless"—then being hospitalized, perhaps for related reasons. Kardashian West's self-exile from work obligationsand social media. This was a wakeup call not just to her fellow celebrities but to a culture that worships breakable idols.

The "she really came into her own" trope doesn't apply here, because Beyoncé was already, was always Beyoncé. What she did was push herself and her art to an ever higher, nuanced level, drawing in race and politics and feminism and the complexities and contradictions of being a woke female human being. The scariest/most exciting part is that we probably haven't even seen her final form yet. ::shiver::

Maggie Maloney Associate Digital Editor Maggie Maloney is the associate editor at Town & Country and ELLE Decor, where she covers style, beauty, jewelry, and the many members of the royal family.
This content is created and maintained by a third party, and imported onto this page to help users provide their email addresses. You may be able to find more information about this and similar content at piano.io
Advertisement - Continue Reading Below
More From Celebrity
Zaya Wade Freaked Out Chatting With Michelle Obama
Harry & William Won't See Eye-to-Eye Any Time Soon
Advertisement - Continue Reading Below
Jennifer Lopez Stuns in a Little Black Mini Dress
Harry & Meghan Won't Throw the Queen Under the Bus
Harry & Meghan Have Nothing to Lose in Oprah Chat
How to Watch Meghan and Harry's Oprah Interview
Gigi Hadid Dyed Her Hair Red
How Celebrities and Friends Are Supporting Meghan
Meghan Didn't Need Prince Harry to Be Wealthy
Pregnant Emma Stone Runs Errands in Santa Monica