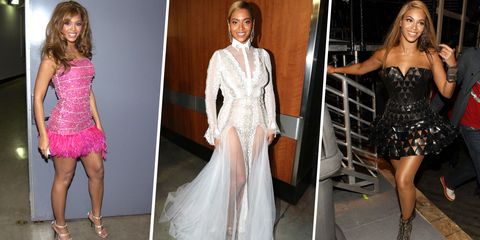 The 59th Annual Grammy Awards are almost here. And while we wait to see who takes home the honors on music's biggest night, we already know what blessed moment *will* happen—a Beyoncé' appearance—twins and all. 👑🐝 To mark the occasion, we traveled down memory/fashion lane to see what amazing ensembles Queen Bey has worn behind-the-scenes at past Grammy Awards. Tune into the Grammys on February 12th at 8 p.m. EST on CBS to see what (predictably) stunning outfit Beyoncé wears this year.

Back in 2001, Beyoncé wore a champagne colored dress designed by her mom Tina Knowles, who was the costume designer for Destiny's Child back in the day.

Beyoncé wore a black lace gown while performing with Destiny's Child and Alejandro Sanz at the 44th Annual Grammy Awards in 2002.

Beyoncé heads to a Grammys after-party in this sheer purple dress.

Beyoncé wore a hot pink feathery minidress for her legendary performance with Prince at the 46th Annual Grammy Awards.

The same year, she *also* wore a blue and sequined number for yet another Grammys performance.

Beyoncé posed backstage with her mom, Tina, who designed the shimmery gold gown she wore that night.

Beyoncé wears a black gown with gold detailing by Roberto Cavalli at the 47th Annual Grammy Awards, where she posted backstage with Gwen Stefani. It was a *huge* night for Queen B: she took home five Grammys!

At the 49th Annual Grammy Awards, Beyoncé shimmered in a silver gown with a pleated skirt. Mary J. Blige and Bey snapped this BTS photo during the show.

So much greatness in one photo: Beyoncé, wearing a Giorgio Armani Privé studded dress, with Rihanna backstage. 🙌 🙌.

Bey changed into this Atelier Versace textured dress during the show. She went on to win six awards at the 2010 Grammys, the biggest Grammy night of her career.

Beyoncé wore sparkly short shorts with a deep-v blazer to the 53rd Grammy Awards. She snapped a photo with Janelle Monáe while backstage at the show.

In 2013, Beyoncé wore a black and white jumpsuit by Osman Studio and hung out with our dream BFF, Ellen Degeneres.

Beyoncé was spotted backstage with hubby Jay Z wearing a *gorgeous* white gown by Michael Costello. The couple performed "Drunk In Love" together during the show.

Awww! Bey and Jay have an adorable moment backstage at the 56th Annual Grammys Awards.

Beyoncé changed into a short black mini dress by Balmain with a fringe skirt towards the end of the show.

In 2016, Queen Bey wore this *major* Inbal Dror dress. And yes, it was later revealed that this was a wedding dress. But it's Beyoncé, so she killed it.

In this backstage photo, Beyoncé shares a laugh with Taylor Swift. Oh, to be BTS at the Grammys.

Next
24 Celebrities Who Have Their Own Barbie 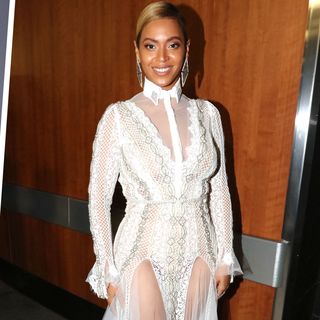 Advertisement - Continue Reading Below
Maggie Maloney Associate Digital Editor Maggie Maloney is the associate editor at Town & Country and ELLE Decor, where she covers style, beauty, jewelry, and the many members of the royal family.
This content is created and maintained by a third party, and imported onto this page to help users provide their email addresses. You may be able to find more information about this and similar content at piano.io
More From The Grammys 2021
Megan Thee Stallion, Cardi B Stole the Show
Taylor Thanked Joe During Her Grammys Speech
Advertisement - Continue Reading Below
Beyoncé Is the Winningest Woman in Grammys History
Watch Dua Lipa's 2021 Grammys Performance
Billie Eilish, Harry Styles React to Each Other
The Best Twitter Reactions to the 2021 Grammys
Megan Thee Stallion Frosts Herself in 222 Carats
The Best Red Carpet Looks at the 2021 Grammys
What to Expect From the Grammys This Year
How to Get Demi Lovato's Look From the Grammys