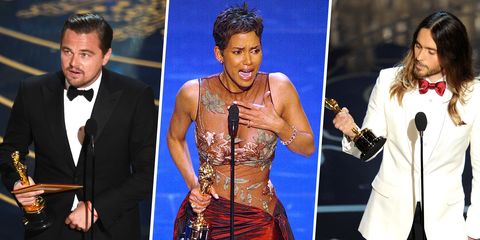 The Oscars are a time for Hollywood to celebrate the best of, well, itself. But, sometimes, the artists who are honored by the Academy use their platform as a chance to speak out about political issues close to their hearts. Here are 10 of the most political Oscar moments of all time.

When Marlon Brando won Best Actor for his iconic role in The Godfather, he shocked the Academy—and the world—by declining the award and sending activist Sacheen Littlefeather, then-president of the National Native American Affirmative Image Committee, to read a speech protesting the US Marshals siege on Wounded Knee.

In 1993, Susan Sarandon and Tim Robbins were tasked with presenting the award for Best Editing. Usually, the winners are the ones making the memorable speeches, not the presenters—but Sarandon and Robbins gave a passionate speech calling out the U.S. government for running an internment camp for Haitians suffering from HIV and AIDS in Cuba.

In 1978, Vanessa Redgrave was nominated for her role as anti-Nazi activist Lillian Hellman in Julia. The Jewish Defense League protested the nomination because Redgrave had narrated (and helped fund) a documentary promoting Palestine.

In her acceptance speech, Redgrave addressed the protest and denounced the protestors. Her speech was met with boos from the audience.

It's not surprising that outspoken documentary filmmaker Michael Moore would give one of the most political speeches in Oscar history. When he accepted his award for Bowling for Columbine, he used the opportunity to denounce then-President Bush, who had just invaded Iraq.

The crowd booed and the Academy quickly played Moore off the stage.

When Sean Penn won Best Actor for his portrayal of gay rights activist Harvey Milk, he used his speech to advocate for equal rights—specifically for the LGBT community. His speech came just months after Californians passed the controversial Prop 8 initiative that reinstated the state's ban on gay marriage.

Leonardo DiCaprio is almost as well-known for his environmental activism as he is for his incredible acting. So, when he (FINALLY) took home his first Oscar in 2016, Leo used The Revenant's themes about nature as the perfect opportunity to address global warming and climate change.

When Alejandro González Iñárritu won Best Director for The Revenant in 2016, he spoke out about tribalism and race—which were especially important topics during the year of #OscarsSoWhite.

When John Irving took home the Best Adapted Screenplay Oscar for The Cider House Rules in 2000, he thanked Planned Parenthood and the National Abortion Rights League—and even shouted out the Academy for honoring a movie that tackled the subject of abortion.

When Jared Leto accepted his Best Supporting Actor award for Dallas Buyers Club, he addressed fellow dreamers in place like the Ukraine and Venezuela, which were both in times of upheaval due to the Russian occupation of Crimea, and protesters calling for the resignation of President Nicolas Maduro, respectively.

In 2002, Halle Berry became the first Black woman to win Best Actress and she took the opportunity to acknowledge what the moment meant, not just for her, but for all women of color. Diversity has, of course, continued to be an issue for the Academy.

Next
What the Oscars Are Really Like: A Behind-the-Scenes Diary from the 2016 Academy Awards 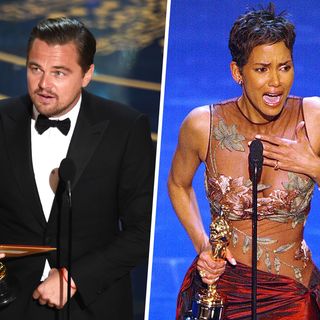