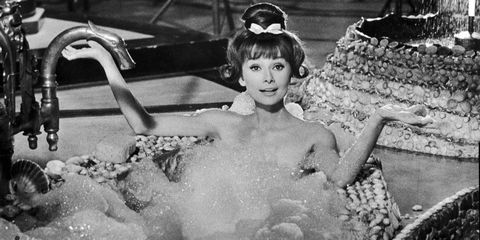 The restorative properties of taking a bath are well documented. Noteworthy soakers throughout history include Cleopatra, who famously filled hers with milk and honey in a quest to capture eternal youth. In movies, bath scenes play a pivotal role, running the gamut from steamy to downright terrifying to create some of the most iconic on-screen moments of all time. For your relaxation pleasure, we've rounded up some of the more unusual photographs celebs soaking it up.

Charlotte Rampling in a bathtub scene from the film Georgy Girl, 1966.

French actress, Maria Schneider in a still from the film, Last Tango In Paris, directed by Bernardo Bertolucci.

Giorgio Armani taking a bubble bath in his large marble tub at home in Italy in 1979.

8 of 34
Brando and Nicholson

Marlon Brando and Jack Nicholson in still from the 1976 movie, The Missouri Breaks.

Sophia Loren steps out a tiled tub in Germany, 1955.

Virgin tycoon Richard Branson reading the newspaper in the bath on his boat in Little Venice, London.

Charlton Heston bathes in a bucket while filming The Pigeon That Took Rome in Italy in 1962.

Leonardo DiCaprio and Johnny Depp in a scene from the film What's Eating Gilbert Grape.

Kevin Spacey gazes at Mena Suvari as she bathes in rose petals in the iconic scene from American Beauty.

Extravagant performer, Liberace taking a bubble bath in his $55,000 marble tub in his Las Vegas mansion.

Zsa Zsa Gabor clowns in a bathtub on a film set wearing her costume dress and jewels.

Tony Curtis and Marilyn Monroe in a still from Some Like It Hot.

Mick Jagger, Anita Pallenberg, and Michele Breton in the movie, Performance in 1970.

Audrey Hepburn, sitting up to her chest in soap suds in a seashell-lined bathtub.

A 17-year-old Elizabeth Taylor giving her dog wash in a tub tub.

Comedienne Joan Rivers using her tub as a conference room.

Richard Burton doing some of his best thinking in the bath in 1969.

John Lennon and Yoko Ono finally making it from the bed to the bath in 1968.

James Bond star Sean Connery relaxing with a vodka martini in a scene from Diamonds Are Forever.

Brigitte Bardot seduces in a scene from La Parisienne.

Steve McQueen soaks alongside Tuesday Weld in a scene from The Cincinnati Kid.

Next
The Best Bling: Crystals, Diamonds, and More 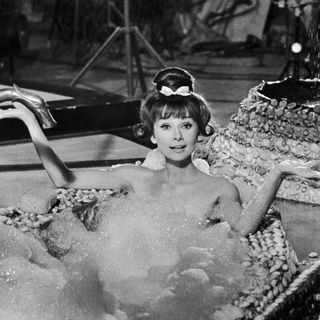