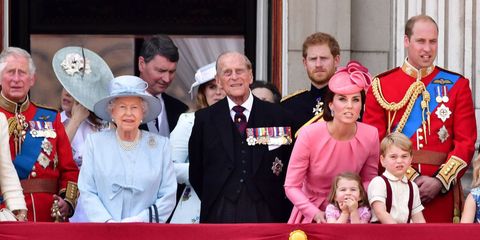 The British Royal Family have had their fair share of scandals.

Some are so infamous they've been heard by everyone and, thanks to tabloid front pages and ground-breaking television interview, many of the rumors have become inescapable. Over the years, there's been the story of Prince Harry dressing up as a Nazi for a fancy dress party, Princess Diana revealing there were "three of us" in her marriage to Prince Charles, and Prince Harry gallivanting around a Las Vegas hotel room naked.

However, there are a few indiscretions and illicit scandals that you might not be so familiar with...

The ultimate breach of royal security came in 1982 when a man managed to scale Buckingham Palace and creep into the Queen's bedroom.

How on earth this could have happened no one is quite sure, but at around 7:15 a.m. on a July morning, Michael Fagan climbed the wall and arrived in her bedroom. At the time, there were reports he spoke to her for 10 minutes, however, in 2012 he told The Independent on Sunday she ran out of the room "her little bare feet running across the floor."

He also told the newspaper that, to this day, he doesn't know what spurred him to commit the trespassing but it may have been due to some magic mushrooms he put in his soup five months beforehand.

Reconciling the Royal Family — an institution steeped in tradition and old-time values — with modern times and increasingly liberal societal values can prove difficult. For example, smoking marijuana as a teenager might not be that shocking to some. However, when one of the most famous teenagers in the world does it, it is.

When it was revealed that the 16-year-old Prince had been caught smoking pot in the grounds of Highgrove, it made front page national news on the now defunct News of the World. What's often forgotten is that as a punishment, and learning experience, Prince Charles sent his son to rehab – but only for a day. Prince Harry met with recovering heroin and cocaine addicts at a treatment centre in south London, reported the BBC at the time.

RELATED: This Is What the Royal Family Actually Does Every Day

While it might not seem like a huge scandal now, in 1963, a young Prince Charles sparked a frenzy when he went into a pub and ordered an alcoholic drink.

On a school trip to the Isle of Lewis in Scotland, the Queen's first-born requested a cherry brandy at a local pub. According to Vanity Fair, a tabloid reporter was present and the incident sparked international headlines. Buckingham Palace denied then admitted the incident happened and Prince Charles reportedly said the words 'cherry brandy' still make him wince. As for The Crown Hotel pub, it became iconic, and in 2014 its closure was reported by national press.

In 1992, the Daily Mirror published photos of the Duchess of York Sarah Ferguson in a compromising (and very awkward) situation with Texan millionaire John Bryan. The Duchess had separated from Prince Andrew at this stage so that wasn't the biggest part of the scandal — the focal point of the pictures were that Bryan appeared to be sucking the Duchess' toe.

Bryan allegedly told The Daily Mail's royal reporter Richard Kay he was kissing her toes, not sucking them. While her privacy was undoubtedly invaded, the toe-curling (pun intended) incident caused huge embarrassment for the Royal Family.

The Queen's only daughter, Princess Anne, became the first senior royal to end up with a criminal record in 2002. The Princess Royal pleaded guilty to a charge that one of her English bull terrier dogs – Dotty – had attacked two children.

According to the BBC, Princess Anne had to appear in court where she was fined £500, ordered to pay £500 in damages, keep her dog on a lead in public, organize training for Dotty, and pay £148 in court costs over the charge, which came under the Dangerous Dogs act. The dog also reportedly bit some of the Queen's corgis.

In 1992 — shortly after the separation of Princess Diana and Prince Charles was announced — details of a private, intimate conversation between Prince Charles and Camilla Parker-Bowles (now, the Duchess of Cornwall) were made public and caused large-scale embarrassment.

The tapes were dubbed 'Camilla-gate' and were published in full by Australian and German media and in parts by the British press. One of the most excruciating parts of the tapes came when Prince Charles suggested he wanted to be Camilla's "tampax." In 2008, it was revealed that the phone lines had been bugged.

Another embarrassing leaked phone transcript was 'Squidgey-gate', which was reported in The Sun in 1992. The scandal incorporated private phone calls between Princess Diana and her friend James Gilby in 1989. In the calls, which were fairly personal, Gilby repeatedly referred to the Princess of Wales as 'squidgey'. Diana later confirmed to Martin Bashir, in a very famous BBC Panorama interview, that the conversation happened, but denied the couple had an affair.

"He [Gilby] is a very affectionate person but the implications of that conversation were that we'd had an adulterous relationship which was not true," she said.

The Royal Family and the British press have had a tumultuous relationship, but one royal's disdain for the media became particularly apparent in 2005 when Prince Charles was overheard talking about a reporter.

During a ski trip in Klosters in the Swiss Alps, the family were asked about Prince Charles' upcoming wedding to Camilla Parker-Bowles by BBC royal correspondent Nicholas Witchell.

"These bloody people," he remarked to his sons William and Harry under his breath. "I can't bear that man. I mean, he's so awful, he really is."

This content is created and maintained by a third party, and imported onto this page to help users provide their email addresses. You may be able to find more information about this and similar content at piano.io
Advertisement - Continue Reading Below
More From Celebrity
Meghan Markle and Prince Harry Arrive in NYC
Kate Middleton Looked Radiant in Cream
Advertisement - Continue Reading Below
People Are Convinced Kylie Is Having a Boy
Kim Kardashian's Met Gala Ponytail Cost $10K
Megan Fox and Kourtney Posed for Sexy Skims Pics
Britney Spears Dedicated a Message to Her Sons
Meghan's Face "Lights Up" When Harry Walks In
Kate Middleton, Millennial, Wore Skinny Jeans
'Sex and the City' Star Willie Garson Dies Age 57
Princess Eugenie's Son Got to Meet Prince Philip