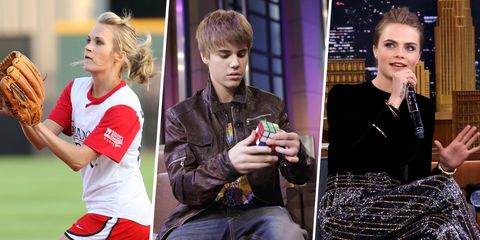 If you're doing icebreakers as a celebrity, are you allowed to just go, "You know who I am?" Even if not, you'd still have ammo for two truths and a lie, though, as these 25 famous people show. Ahead, their lesser-known skills revealed.

CaKe might be quiet these days, but never forget that Cara's beatboxing ain't bad.

There's a whole routine with this bizarre tongue formation, which you can watch in action here.

Was a nationally ranked junior tennis player, meaning you'd want him to be your doubles partner.

Singing won out eventually, but Underwood played softball for nine years growing up.

He keeps dozens of "top pedigree" birds, who drink Fiji water and meet celebrities like Migos. Does that make him an ornithologist then? See for yourself.

Just when you thought NPH had ALL THE TALENT IN THE WORLD, he pulls a rabbit out of a hat. He's shown off his magic tricks on TV, which is like, why wouldn't he?

"Loose Goose—I haven't heard that name in a long time." —Bruce Willis, probably. Before he was John McClane, Willis was the harmonica player in an R&B group. He still plays, now with a group called The Accelerators.

While Taylor Lautner caught grapes in his mouth, which sounds a lot less impressive than it looked.

While other unnamed celebrities are out at the klerb, Seyfried knits hats for her friends, including Ellen DeGeneres in this cute video.

Riding began as a form of therapy after her split from Nick Young, but judging by those jumps, it's become a skill too.

He started the Steve Martin Prize for Excellence in Banjo and Bluegrass to raise awareness for the instrument. He loves it that much.

Maybe photography, one of her Majesty's hobbies, helped the Queen and her granddaughter-in-law Kate Middleton bond.

How incredibly fast he can solve a Rubik's Cube must be seen to be believed.

Geena for prez, especially since she was once ranked in the top 32 archers in the *world,* qualifying as a semi-finalist for the U.S. Olympic Archery team in 1999.

She could throttle your ass at ping pong, in no small part due to the fact that she's part owner of SpiN, a club dedicated to the sport.

As you've probably figured out, he juggles!

Make this your phone background. He's now known for insulting celebrities while hosting awards shows, but once upon a time, he was part of a not-very-successful New Wave pop duo called Seona Dancing.

If you've got an actor who knows how to play the accordion (okay), you write it into the show, as Matt Weiner did for Joan Hollaway. In a Q&A on AMC, Hendricks said she's "always loved that instrument. It's so romantic and it's got this full, rich sound."

First of all, the caption for this photo is priceless: "Colin Farrell working as a £30 a night line dancing instructor, 1997." (But in all caps, which is even more LOL. Also, "line dancing" as in country and Western.) It's all true, as he said in an interview with fellow dancer Conan O'Brien.

In the aforementioned video, O'Brien mentions being an expert tap-dancer—but not so much so that he could avoid kicking a poor girl in the face, oops.

Next
See the Pirelli Calendar 2018 Stars 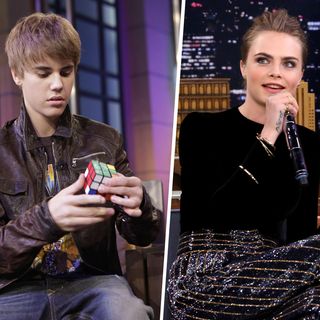