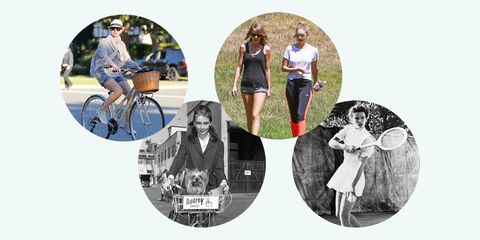 "Go outside," they said. "It'll be fun," they said. But apparently outdoor activity *can* be not-horrific, as shown by these 50 photos of famous people doing them, whether it's hiking in full makeup or cruising around the urban jungle on a Citi Bike (a summer-date favorite of Leo DiCaprio's).

Do people in L.A. take "walking meetings?" That sounds real.

And on the unreal-er side of things, here is Wolverine just gone for a dip.

Splash News
5 of 50
The Duke and Duchess of Cambridge

*Not* not a postcard.

Could definitely be an ad for...one of those brands that sells those clippy things that keep you from falling off a sheer cliff face.

She's not going backwards this time!

Tag yourself. (I'm the left-most very good boy who's too hyper to walk himself.)

Big love for the angle of this, which implies that the photographer might have been hiding amongst the shrubbery, possibly with a bunch of greenery taped to his hat for camouflage.

THEY MUST BE REAL.

Right before this was taken, Amanda Seyfriend and Finn had a very important discussion about her career trajectory. (He still has opinions about her doing that Nicholas Sparks movie with Channing Tatum.)

Two dudes out for a stroll.

Wouldn't want to cramp now, would we? Also, what is the light in California??

Keri seems like the type of biker who would obey traffic signals and do the turn-y motions with her arms instead of plowing through people trying to walk here.

More reckless ones from KJ in this shot.

Pity the fool on the other side of the net.

OMG @ the image on his shirt, though.

When you're a supermodel but your pup is like "We all know who really runs the show, Helena."

Young Ronald Reagan could get it, especially in a setting as barf-inducing-ly picturesque as this.

A lady never leaves the house without her aviators, lipstick, and studded fingerless gloves.

The picture of elegance. But then zoom in on her face and go, "Mood."

This WATER. (Was made for a Dolce & Gabbana fragrance ad.)

On his way to steal your girl.

Basket! Bet it has a bell too.

There to remind you that life isn't fair.

Riddle me this: Was everything just prettier in Old Hollywood? Or are we primed to think that?

Perfectly captures that feeling after you serve and your wrist hurts and you're just like, "Please just make it over the net so I don't let my team down, they already hate me as it is."

Paid for by Summer™.

Black and white hides a multitude of sins...NOT THAT THIS NEEDS IT.

In a dress, no less.

The original look back at it.

Cannot handle the majesty of it.

Why does it look like Justin Bieber is an escaped felon who's being returned to custody by the smart-aleck FBI agent who stole his heart?

Fact: Nobody loves summer as much as Leonardo DiCaprio.

Next
Celebrities Who Have Gone Naked for Ad Campaigns 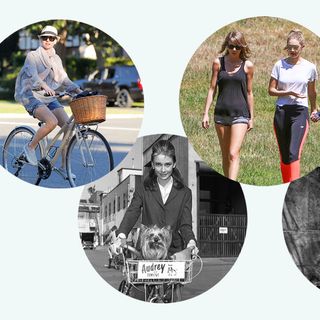