Is there a word for the sense of ennui one feels when their favorite show has been off the air for months? Because that's how we've been feeling ever since Victoria went on hiatus after its stunning first season—but feel free to start singing the addictive theme song to yourself once more, because the show is returning for what looks to be a devastatingly romantic second season in early 2018.

In preparation for another chapter in Queen Victoria's captivating reign and smoldering marriage to Prince Albert, MarieClaire.com is bringing you an exclusive first look at the show's new season in the clip above.

Plus, because we're nerds for Queen V, we made a GIF of what's in store. Feel free to watch it on an endless loop, and head's up that Victoria's second season airs on PBS Masterpiece January 14, 2018. 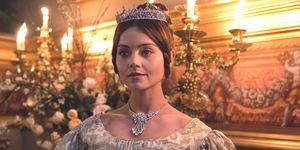 5 Reasons 'Victoria' Should Be Your New Aesthetic

Mehera Bonner Contributor Mehera Bonner is a news writer who focuses on celebrities and royals—follow her on Instagram.
Advertisement - Continue Reading Below
More From Culture
Ryan Murphy's Producing a Love Letter to Hollywood
This Is When the 'Love Is Blind' Finale Will Drop
Advertisement - Continue Reading Below
Will Gigi and Damian Actually Get Married?
Princess Latifa's Great Escape
Nobody Can Stop Talking About 'Love Is Blind'
Great New Movies Based on Real Events
You Can Now Take a 'Love Is Blind' Vacation
The Best New Music of 2020 (So Far)
Will Hannah Ann Sluss Be the Next 'Bachelorette'?
The 13 Sexiest Movies on Netlfix