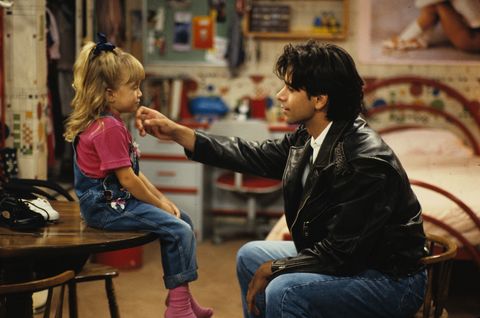 Update, 5/23: Unfortunately, though probably as expected, Mary-Kate and Ashley Olsen will not be reprising their role as Michelle Tanner in the upcoming Netflix series Fuller House. Executive producer Robert L. Boyett confirmed in a statement:

"Although Ashley and Mary-Kate will not be a part of Fuller House, I know how much Full House has meant to them and they are still very much considered family. It has been exciting to see how they have built their professional careers, and I support their choice to focus on their fashion brands and various business endeavors. I appreciate their support and good wishes towards Fuller House."

It seems Uncle Jesse is a little down about the duo's decision. On Friday night, John Stamos shared the official news on Twitter, adding that he's #heartbroken. 😔

Update, 5/7: DJ Tanner just kinda-sorta confirmed Uncle Jesse's Big News Re: Full House Reunion, so it's ever closer to being in. the. bag. (Quick refresh: John Stamos recently said they're trying to include at least one episode with the entire Tanner family.)

"I hope everyone will be on the show," Bure said. "There are a lot of talks right now. Fans of the show won't be disappointed. I promise."

But we know what you're thinking: What about the rest of the cast?? Worry not. According to Stamos, "We're going to try to get everyone in the first [episode]. We're going to do an hour special and then it'll go into the spinoff."

Watch his announcement below, relive your childhood, etc. etc.:

Original post, 4/2: If this news report had come out yesterday, the Internet would have assumed it was an April Fools' joke. But it's not: According to TV Line, Netflix is about to bring back Full House, with a sequel show awesomely titled Fuller House.

Details are scarce at this point, but according to the report, the show would feature D.J. Tanner (Candace Cameron Bure) and Kimmy Gibbler (Andrea Barber) for a 13-episode, multi-camera series. John Stamos will serve as one of the producers for the show, and he, Bob Saget, and Dave Coulier are rumored to be making cameos.

Reps for Warner Brothers and Netflix wouldn't comment on the TV Line report, and neither has any former cast members. In an interview published yesterday on TooFab.com, Bure said she'd be down for a reunion. "If it's a good opportunity or a good place to do that, I think we all would do that. I would do that and have fun with it." Plus, she just Instagrammed a photo of herself doing the Tough Mudder race with Barber, showing D.J. and Kimmy are still BFFs after all these years:

It's been 20 years since Full House aired its final episode, which makes this perfect timing. And since it's fun to dream, here's hoping Mary-Kate and Ashley will stop by for a quick, "You got it, dude."

Watch the 'Friends' Reunion We've All Been Waiting For

Sarah Lindig Senior Digital Editor, Special Projects Sarah Lindig is the senior digital editor, overseeing special projects for Harper's Bazaar.
Advertisement - Continue Reading Below
More From Culture
The Best Korean Dramas of All Time
Mainstream Movies With * A LOT * of Nudity
Advertisement - Continue Reading Below
Things Between Victoria F. and Chase Rice Got Ugly
Who Are the Women of 'The Bachelor' in 2020?
Rosalía Is the One to Watch at This Year's Grammys
Sydney From the 'Bachelor' Knows Hannah Brown
The 10 Hottest Movies on Hulu Right Now
'The Bachelor' Has Already Finished His Season
When Michelle Carter Is Expected to Walk Free
How Much Time Did Michelle Carter Get in Prison?