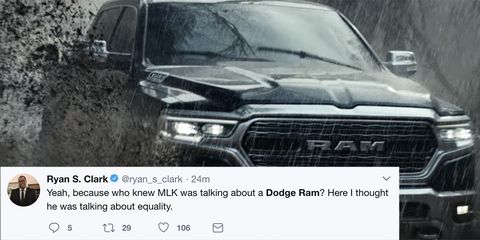 During the Super Bowl, Dodge Ram ran an ad that used part of a Martin Luther King Jr. speech, and people were not pleased.

Many people on Twitter were upset with the company's decision to use the speech during a commercial, especially during Black History Month. Here are some of the best tweets about the problematic ad.

Not sure MLK’s dream was to drive a Dodge Ram.

This Dodge Ram ad was offensive and you should be ashamed #sblii https://t.co/sgwfXpITXM

"I have a dream that my children will one day live in a nation where they will not be judged by the color of their skin, but by the content of their fully loaded Dodge Ram 1500."

I’m not sure what product I WOULDN’T feel icky about Martin Luther King, Jr., shilling for via archival audio, but Dodge Ram is pretty far down that list anyway.

The worst commercials are those that use icons like Martin Luther King Jr to sell things like a Dodge Ram truck.

Kayleigh Roberts Contributor Kayleigh Roberts is the weekend editor at Marie Claire, covering celebrity and entertainment news, from actual royals like Kate Middleton and Meghan Markle to Hollywood royalty, like Katie Holmes and Chrissy Teigen.
Advertisement - Continue Reading Below
More From Culture
The Best Cooking Shows on Netflix
The Wildest Reviews of Joe Exotic's Zoo
Advertisement - Continue Reading Below
What Happened to Doc Antle from 'Tiger King'?
Is Joe Exotic Still in Jail?
What Happened to Dillon Passage from 'Tiger King'?
Julia Louis-Dreyfus Has All the, Uh, Right Answers
Just 41 Wildly Funny 'Tiger King' Tweets
Beach Music to Get You Excited for Warm Weather
These Classic TV Shows Are Available to Stream
America Is Crushing on My Boyfriend Andrew Cuomo