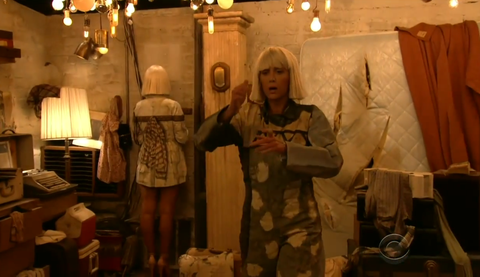 A Sia performance is always a thing of beauty—annnd mystery—but a cameo from a nude leotard-clad Kristen Wiig? Now that's something special.

During tonight's Grammy Awards, the Saturday Night Live alum joined Sia onstage for "Chandelier" alongside Dance Moms protégé Maddie Ziegler. But here's the thing, there was NOTHING funny about it. Wiig was an utterly serious, compelling vision as she sauntered and twitched around the stage, which had been transformed into a messy apartment set.

Watch the performance below:

Is the Red Lip Dead? The Grammys Say SoSee Every Look from the 2015 Grammy Awards Red Carpet
This content is created and maintained by a third party, and imported onto this page to help users provide their email addresses. You may be able to find more information about this and similar content at piano.io
Advertisement - Continue Reading Below
More From Culture
Thrilling New True Crime Documentaries
What Is Stephanie Land Doing Now?
Advertisement - Continue Reading Below
'Succession' Is Ready to Go 'Full F*cking Beast'
The 2021 Book Releases You Don't Want to Miss
'Squid Game' Season 2: Everything We Know
Breaking Down the Ending of 'Maid'
The Best Dating Sites, Once and For All
How to Make a 'Squid Game' Halloween Costume
All the Deets on Michelle's 'Bachelorette' Season
'Bridgerton' Season 2: Everything We Know