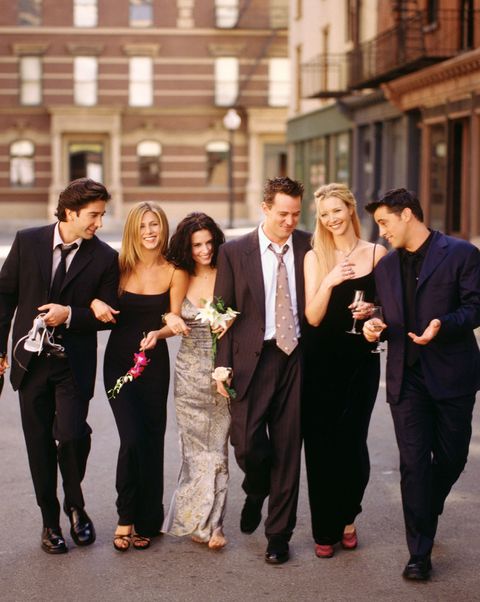 The Friends reunion is going down on February 21, and despite Matthew Perry being "busy" because he has "work" or "whatever," it's poised to be the greatest meeting of the '90s minds ever. At least based on a new preview where Andy Cohen asks the cast if they spent their free-time having sex with each other.

"Did you all sign contracts saying that you wouldn't sleep with each other?" Andy asks Monica, Ross, Phoebe, Joey, and Rachel, otherwise known as Courtney Cox, David Schwimmer, Lisa Kudrow, Matt LeBlanc, and Jennifer Aniston.

Their answer? Awkward silence followed by David Schwimmer making an inarticulate series of noises. Sooooo, we're going to take that as a yes they signed contracts, but that no they didn't stick to them.

Watch a clip from the reunion below and have your day made in the process. (Other than you, Chandler. You are not invited to this viewing session due to a profound failure to understand the song lyrics "I'll Be There for You.")

Mehera Bonner Contributor Mehera Bonner is a news writer who focuses on celebrities and royals—follow her on Instagram.
Advertisement - Continue Reading Below
More From Culture
The 8 Best Rom-Coms of 2020
The Perfect Situation to Watch Any Quibi Show
Advertisement - Continue Reading Below
We Could Be Getting More 'Tiger King'
HBO Is Making Iconic Shows & Movies Free to Watch
Tim Gunn & Heidi Klum Also Wear PJs to WFH
'Parasite' Is (Finally!) Coming to Hulu
The Best Teen Movies of 2020
Family Movies Both Grown-Ups and Kids Will Love
The Best Wedding Movies of All Time
Read 'Anna K' Even If You Didn't Read the Original