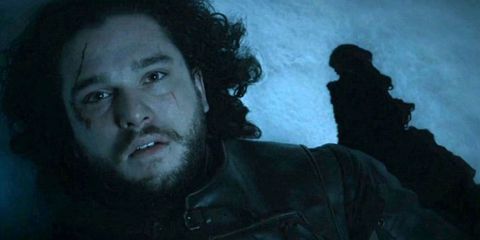 Dream big, fellow Jon Snow truthers, for though the night is dark and the network execs adamant, HE LIVES—this sort-of-"duh"-but-sort-of-clever fan theory proves it. Again.

After his fellow Night's Watchmen went all Julius Caesar on him last season, the poor bastard can be seen lying in a pool of his own blood, a shot the internet re-fixated on during Sunday's premiere. There were feels and quiet sobbing again, yes, but something else: wolf shape = warg into Ghost = alive.

Poor #JonSnow, pretty much everybodies no1. Maybe he'll be back? NOTICE the wolf in his blood? http://t.co/ivh0sMPURr pic.twitter.com/HaNxS4sZ79

An alternate theory suggests it's actually a dragon shape, which could indicate that Snow is the son of Rhaegar Targaryen and Lyanna Stark and not illegitimate after all. But ::waves hand:: priorities, people!

Am I the only one who noticed the giant fire breathing dragon above #JonSnow? #GameofThrones #GameOfThronesSeason6 pic.twitter.com/riWJU4aU02