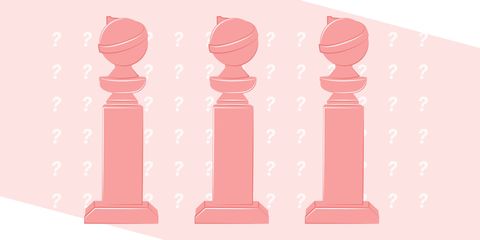 The Golden Globes air this Sunday night on NBC, and promise to be a magical adventure full of gif-able celebrity reactions, awkward jokes, and—oh yeah—awards. This year's contenders are ridiculously strong (seriously, go see Moonlight), and the race will be tight. That said, we've placed our bets on who will go home with awards, and who won't—but definitely should.

Manchester by the Sea

In conclusion: Moonlight is the best, everyone go see it, the end, goodbye.

In conclusion: While La La Land is romance and pure loveliness wrapped up in a musical bow, 20th Century Women *might* (just might!) be more worthy of an award.

In conclusion: The innovation and creative direction Damien Chazelle brought to La La Land is truly like no other. He deserves all the awards, but especially this one.

Casey Affleck, Manchester by the Sea

In conclusion: Denzel Washington was absolutely genius in Fences, but Casey Affleck's performance in Manchester by the Sea has been generating much more buzz—which indicates that he'll likely win over Washington.

In conclusion: There is literally no way Natalie Portman won't nab this Globe—she's an awards show darling, and her win is a forgone conclusion. But it should be noted that Ruth Negga's performance in Loving was equally if not more impressive.

In conclusion: Colin Farrell is more than worthy of this award, but doesn't a small part of you wish we lived in a world where Deadpool won everything? Same.

Hailee Steinfeld, The Edge of Seventeen

In conclusion: Benning is outstanding in 20th Century Women and *might* get the win, but Emma Stone has that edgy appeal voters love.

In conclusion: Both performances were award-worthy, and while Ali is perhaps slightly more mind-blowing, Patel will likely take this one home.

Michelle Williams, Manchester by the Sea

In conclusion: If Viola Davis doesn't win, we give up.

In conclusion: Manchester by the Sea had a really, really good script. But definitely look out for Tom Ford proving us wrong and taking the win.

In conclusion: Sorry, have you heard the La La Land soundtrack? It's basically the only redeeming thing about the year 2016.

In conclusion: The power of Lin-Manuel Miranda is unbeatable.

Kubo and the Two Strings

My Life as a Zucchini

In conclusion: It's not Disney's best film of all time (that would be Beauty and the Beast), but it's up there—and probably has the edge on this year's fellow contenders.

In conclusion: PSA to literally everyone: please go see Elle before the Golden Globes so you can 👏 👏 👏 when it wins.

Will win: The Crown

In conclusion: Don't get us wrong, The Crown is really, really, really good. But does it have the nuance, intellectualism, and cult-watchability that Westworld has? Did it unite the internet in one singular obsession? No.

Mozart in the Jungle

Will win: Veep (or Transparent)

In conclusion: Black-ish is more than worthy, but this is Veep's year. Though, if history repeats itself it might end up being Transparent's year.

In conclusion: Maybe we're in denial (some say The Night Manager will slay this category), but People vs O.J. Simpson: American Crime Story is so good it's hard to think about the possibility that it won't win.

In conclusion: We love ourselves some Odenkirk but Rami Malek has our hearts.

In conclusion: Ugh, this category is so hard to call. While Winona Ryder might best Claire Foy, we predict the English actress will take home the Globe—which really should go to the brilliant Caitriona Balfe. That said, everyone is amazing, CAN'T IT BE A TIE?!

In conclusion: It would be amazing to see Issa Rae take home this award for her brilliant work in Insecure, but it's a known fact that awards shows love themselves some Julia Louis-Dreyfus.

In conclusion: This is also a tough category, as most performances were knock-outs. But as much as we want Travolta to win, the award will probably go to Lithgow for his portrayal of Winston Churchill in The Crown.

Chrissy Metz, This Is Us

Mandy Moore, This Is Us

In conclusion: Olivia Coleman is one of the best actresses in the game and deserves recognition across the pond (AKA in America—she's British), but to be fair, Lena Headey does have more screen-time, and thus a more developed character arc.

Riz Ahmed, The Night Of

Bryan Cranston, All the Way

John Turturro, The Night Of

Courtney B. Vance, The People vs. O.J. Simpson

In conclusion: Bryan Cranston is great, etc, but he's so accomplished already...it would be nice to see Ahmed take this Globe home, that's all we're saying.

In conclusion: Sarah Paulson is everything. No further explanation necessary.

Mehera Bonner Contributor Mehera Bonner is a news writer who focuses on celebrities and royals—follow her on Instagram.
Advertisement - Continue Reading Below
More From Culture
We Could Be Getting More 'Tiger King'
HBO Is Making Iconic Shows & Movies Free to Watch
Advertisement - Continue Reading Below
Tim Gunn & Heidi Klum Also Wear PJs to WFH
'Parasite' Is (Finally!) Coming to Hulu
The Best Teen Movies of 2020
Family Movies Both Grown-Ups and Kids Will Love
The Best Wedding Movies of All Time
Read 'Anna K' Even If You Didn't Read the Original
19 Most Underrated Films of All Time
The Music Podcasts We Keep Pressing Play On