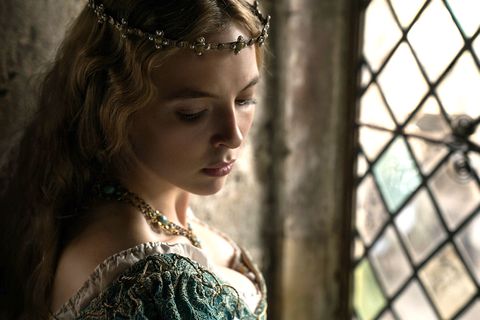 The White Princess is serving up all the royal drama you could ever need in life, and Sunday's new episode will feature Elizabeth of York finally giving birth to the heir to the British throne. Which is a big deal because, hello, future king alert—and also because up until this point Elizabeth has been strictly Team York, and her new baby could switch her allegiance over to Team Tudor.

MarieClaire.com got our hands on an exclusive clip of Sunday's episode, featuring King Henry VII meeting his son for the first time. It's an extremely sweet scene, and one of the first genuinely romantic moments between Henry and Elizabeth (he calls her "radiant," and the look on her face is priceless).

Mehera Bonner Contributor Mehera Bonner is a news writer who focuses on celebrities and royals—follow her on Instagram.
Advertisement - Continue Reading Below
More From Culture
Who Will Be on 'Bachelor in Paradise' in 2020?
When Will 'The Bachelor' Women Tell All Air?
Advertisement - Continue Reading Below
'The Bachelor' Has Already Finished His Season
The Very Best Rom-Coms of All Time, Ranked
An Investigation Into the Next 'Bachelorette'
The Best Korean Dramas to Get You Hooked
Who Is 'Bachelor' Contestant Victoria Fuller?
Everything to Know About Peter Weber's Ex
Read an Excerpt From the Uber Whistleblower's Book
The Must-Watch TV Shows of 2020