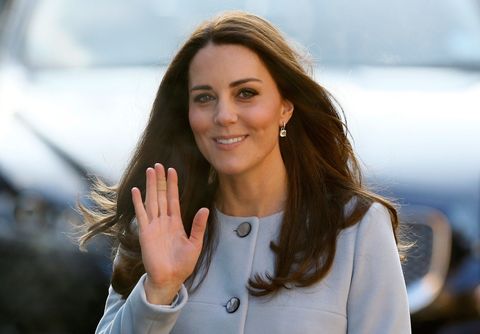 Kate Middleton isn't usually one to wear tiaras, but sometimes donning a crown and shining bright like a diamond comes with the job. (The job in question = being a princess).

Kate's only worn a tiara a few times since marrying into the British royal family, and she accessorized herself with a particularly special one for the Diplomatic Reception at Buckingham Palace on Tuesday, December 8. Duchess Kate wore the Lover's Knot Tiara, commissioned by Queen Mary in 1913, and frequently seen atop the head of her husband's late mother, Princess Diana.

The tiara hasn't been worn since Diana's death in 1997, but it seems appropriate that Kate would festoon herself with an item so special to Prince William's mother.

As is typical with down-to-earth Kate, she didn't make a fuss of the crown, and was only spotted briefly taking it for a spin in the car, as ya do.

Mehera Bonner Contributor Mehera Bonner is a news writer who focuses on celebrities and royals—follow her on Instagram.
Advertisement - Continue Reading Below
More From Fashion
What to Wear on Your Wedding Weekend
And the Bride Wore...Whatever She Wanted
Advertisement - Continue Reading Below
Swap Your Veil for These Bridal Headpieces
Wedding Handbags for the Modern Bride
10 Modern "Something Blue" Ideas for Your Big Day
Unconventional Pearl Accessories for Any Bride
Chic Bridal Pantsuits for Any Wedding Event
Say "I Do" to These Chic Wedding Watches
A New Bridal Trend: Stacking Wedding Bands
The Best Non-Traditional Engagement Rings