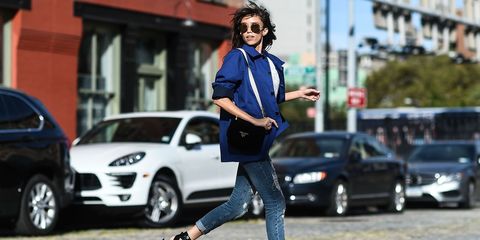 The next time you go outside (HAHA), keep a casual tally of how many girls you see in boxy, oversize denim jackets. Nothing wrong with a classic, but also nothing wrong with wanting something more individual. Below, seven creative options you'd be hard(er)-pressed to find multiples of on the street.

Napoleon is probably rolling over in Les Invalides right now, but who cares? He's dead and can no longer participate in fashion shenanigans. You, however, are not, so channel half the dudes on BBC, and pull out your coveted Stella McCartney for Gap Kids version. Or shop the dozens hitting the high street now (this Mango one is ace).

It's official: Fall's kinkiest trend is also the most desirable, because, you know, sex sells. You don't have to go full-on with a whole suit (though this is Courrèges, SO WHY NOT?)—a topper with an otherwise basic outfit and a statement earring is more than enough.

People in the olden days did weird stuff like wear hats and outerwear to bed, because no central heating, I guess? Regardless, this fur-trimmed Dolce & Gabbana makes dreaming while you're awake that much easier.

With the OG street-style photographer's passing this year, a utilitarian blue street-sweeper's jacket has never held so much meaning.

Call it the Balenciaga Effect—this season, heaps of people will attempt the rhinestone turtleneck with the red puffer jacket pulled down look. To that, we say go ahead!

Hard for dudes to pull off, thankfully the complete opposite for girls. In an ultra touchable fabric, the ho-hum blazer becomes loucher and chicer.

Easy: black is good, orange (plush! Emilio Pucci!) is better. And if you're having any difficulty justifying the purchase of any of the proceeding, just remember that you can wear a good coat over and over, *and* it allows you to wear the same underneath clothes over and over. Not that any of us would do that.