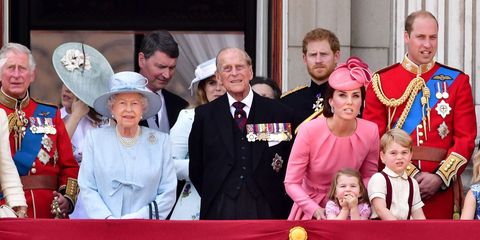 When Queen Elizabeth either abdicates the throne or passes away, there'll be a pretty important vacancy going: monarch of the United Kingdom. But according to a surprising new interview from Prince Harry, no one in the royal family actually wants to take the role.

As it stands, first in line to the throne is Prince Charles, followed by Prince William, then his eldest child Prince George. George is followed by his younger sister Princess Charlotte, and after her—fifth in line—is Prince Harry.

But in an interview with magazine Newsweek recently, 32-year-old Harry discussed what would happen following the end of his grandmother's reign, and revealed that no one's really that keen.

"Is there any one of the Royal Family who wants to be king or queen? I don't think so," he said. "We are not doing this for ourselves but for the greater good of the people."

Going on to clarify his potentially controversial comments—because who'd have thought anyone wouldn't want to sit around in a cloak and crown all day (that's what the Queen does, right?)—Harry continued: "We will carry out our duties at the right time."

Of course, members of the royal family who are in line for King or Queen could all just be calling one another's bluff, playing it cool and pretending not to be fussed, while on the inside being desperately keen to hop on that throne and rule literally just the rest of the royal family.

To be fair, I bet Harry's not even chatted to Prince George about the prospect of becoming King, who might be super keen to give it a go. Now that's a sight I'd like to see.

Catriona Harvey-Jenner Digital Features Editor Cat is Cosmopolitan UK's features editor covering women's issues, health and current affairs.
This content is created and maintained by a third party, and imported onto this page to help users provide their email addresses. You may be able to find more information about this and similar content at piano.io
Advertisement - Continue Reading Below
More From Politics
Moving Forward: We Need Better, Not 'Normal'
Could This Be the Last Year of Roe v. Wade?
Advertisement - Continue Reading Below
Meet the Next Presidential Pets, Major and Champ
Who Is Jen Psaki, Biden's Press Secretary?
Bernie Sanders at the Inauguration Is a Whole Mood
The Inaugural Concert Was a Cheesy Balm
Read VP Kamala Harris's Inauguration Speech
No, There Is No Inaugural Ball This Year
Kamala Harris Is "Momala" to Two Stepchildren
Read Amanda Gorman's Moving Inauguration Poem