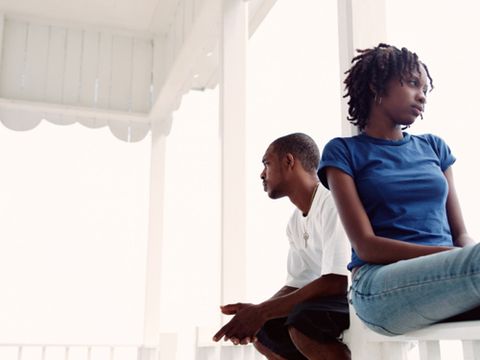 "I've got a guy for you. He's so hot, it's perfect." It was the spring of '08 when Maureen Dowd, the Pulitzer Prize-winning New York Times columnist, decided to take it upon herself to find me a man — specifically, Reggie Love, Barack Obama's "body guy" (read: personal aide). Standing outside the auditorium in Philadelphia where Obama the candidate had just given his loaded race speech, I thought to myself, How could a woman I'd helped with a computer problem once as an assistant at the Times spot the man for me? "Don't be silly," she said, when I demurred. "My assistant will set it up."

I was 27 and working as the only black reporter at Politico.com when a black man was running for president. The issue of race in America had hit a fever pitch, and suddenly everyone seemed determined to cast me as Michelle redux — and all that was missing was my very own Barack.

But as promising as it was to see African-American love on CNN and not just BET, the would-be first couple had become a sort of infomercial guarantee that my girlfriends and I knew was less than assured. According to a 2009 report from Yale University, black women with advanced degrees (like yours truly) are twice as likely as white women to have never been married by age 45. Other official number crunchers (and dream crushers) like the Census Bureau estimate that single sisters with a college education outnumber their black male counterparts nearly 3-to-1 in big cities (thanks in large part to the depressing poverty-and-prison cycle), leaving a very limited dating pool for anyone looking for a black boyfriend.

So when Maureen's assistant called about my date with Mr. Love, it seemed statistically ill-advised to turn down such a prospect. Then he showed up an hour late to our date, wearing gym clothes, and we stumbled through a series of conversational nonstarters. It was clear that Reggie and I had just two things in common: We're black and we have bachelor's degrees.

While most of us have been subject to ill-conceived blind-date profiling — why does the marathon runner with the MBA always get set up with the Gold's Gym trainer? — mine was dismayingly consistent. Never mind the complicated algorithms of eHarmony, my matchmakers used simple math: Black professional + black professional = Huxtables. I'm not saying that my colleagues and neighbors should have set me up with white friends, necessarily. I was just disappointed that, despite all my more awesome qualities, the main thing they all saw was my skin.

Recently, my mother met a black man at Ikea, gave him my card, and then yelled at me when I raised the obvious psycho-killer issues. She said he was nice, a lawyer. Like Maureen, Mom was playing into the kind of stereotypes I was trying to dodge. But I realized that both women just wanted to see me happy. And, even though I was grateful Ikea guy never called, I know that the more weird setups I endure, the better my chances of getting to Mr. Right, whatever his race.

Helena Andrews's memoir, Bitch Is the New Black (HarperCollins), is out this month. She writes a weekly column for Slate's TheRoot.com.

32 Unexpected Valentine's Day Date Ideas
How a Fixer-Upper Helped Me Through My Divorce
How Buying My Condo Helped Me Come Out
My BF Left Me the Day of Our Home Closing
The Best Dating Apps for People Who Hate Dating
The All-Time Best Vibrators, Reviewed by Experts
I Threw Up Officiating My Friends' Wedding
10 Years After Marrying, They Finally Said "I Do"