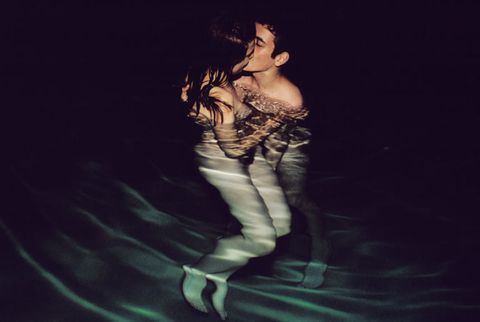 I sat across from my latest Match.com date, watching his eyes scan my tight red dress. I'd been looking forward to meeting him all week, and his text that morning ("Can't wait till tonight, beautiful!") gave me butterflies. He'd even impressed me with his choice of venue: a sexy Moroccan lounge with tables strewn with rose petals.

But 10 minutes into my Desert Sunset martini came the words that made my stomach sink: "I went camping with my brother and nephews," he said. "Man, those little guys are fun, but so much work. I'm not doing that for a while."

OK, then. As a 39-year-old woman hoping to marry and have kids, I didn't need a second drink (or date) to figure out we wouldn't be shopping for a family-size tent of our own anytime soon. But instead of my usual routine after a disappointing evening out—walking home with a weak buzz and heavy heart—I just laughed, entertained by his lack of game, and stuck around. And when I arrived home after midnight, glowing from a hot night of making out, I didn't feel like I'd wasted my evening. He wasn't a keeper, but he was a fun way to spend a Tuesday night. Besides, I had dozens of frozen eggs stashed away, in case it took a lot more evenings in Moroccan lounges to find The One.

I thought I had found him in my mid-20s, but after ending that eight-year relationship at 32 and longing for babies, I began to worry that I wouldn't meet someone before my fertility went south. Dozens of dates and subsequent mini relationships later, my unease turned into panic. I joined more dating sites. I paid thousands of dollars for therapy. I made teary phone calls to friends and family—many who'd already had second kids. The clincher was falling in love at 35 with a man who wasn't sure when—or if—he wanted to be a father. Whenever I saw children, I ached with sadness that I was losing the chance to have the family I had always dreamed about.

So when my OB/GYN gave me the green light to try egg freezing, I jumped at the opportunity to stop my biological clock. The promise of a few more pressure-free years to get the partner part right sounded incredible. After months of doctors' appointments and several weeks of hormone shots, I was ready for my first retrieval. When I left the clinic a few hours later, I realized that the constant anxiety I'd carried around for years had suddenly lifted. Just like the morning after a crying jag, when life seems manageable again, I felt calmer and clearheaded. I had hoped to buy more time so my boyfriend and I could resolve our differences about kids. Now I no longer wanted to wait for a decision. When couples counseling failed to help, we broke up.

Back on Match, I was nervous about starting over. But many guys appreciated my frozen fertility: "This means I can have kids whenever I want," I told them, "and I don't have to rush relationships." Soon I was juggling several dates a week—from men who were ready to build swing sets in the burbs to divorced dads 16 years older and open to second families. When I stopped thinking about dates as my last chance to meet someone, I stopped prematurely cutting bait and rushing home to schedule my next round of meet-ups. Instead, I let my suitors order an extra bottle of wine. I went to the next bar, the late-night after-party. I made out on piers, street corners, and my apartment lobby. The more carefree I became, the more attention I got—from men everywhere.

One evening while I was waiting for my friend at an Irish bar, a group of businessmen invited me to join them for a whiskey shot. They weren't my type, and normally I wouldn't have wasted valuable husband-hunting time drinking with random strangers. But this time, I said, "Why not?" By 9 p.m., I was blotto, eating steak on someone's expense account, and laughing hysterically at outrageous stories. Even though I wasn't interested in any of the guys romantically, I had one of the best nights of my life.

When a lawyer visiting from London asked me out for dinner, I didn't stop and evaluate the pros and cons of a long-distance relationship; I just said yes. The next morning, after an amazing night of torrid sex and tender conversation, as I strolled from his fancy hotel in my white trenchcoat and smeared mascara, I wondered why I hadn't done this sort of thing more often.

By taking charge of my fertility, I had taken charge of my life, and taken back the power I had given every date to determine whether I felt hopeful about my future. Now that I realized I could create fun, sensual experiences with men, I developed a confidence that I could also find the love and family I wanted.

And so I started telling myself, "You're going to be a mom soon enough; you'd better make the most of this time." I worked my way down my single-girl bucket list: wine tastings, storytelling shows. I learned how to surf in Costa Rica and went scuba diving in Thailand. Rather than just going to bars with my girlfriends, I invited them over for homemade enchiladas so I could actually listen to their stories instead of scoping out guys. In my laser-focused search for a partner, I hadn't realized how much I'd missed them.

Then one afternoon, I received a Match e-mail from a sweet and funny divorced dad who wanted more children. Four hours after meeting in a bar, he asked if I wanted to go for a walk. We spent the next hour kissing in a warm September mist. Two months later, he said, "I think I'm falling for you." Five months after that, he asked when my lease was up. The funny thing is, after all of this time and effort, my frozen eggs might not even give me babies. If they don't, I'll find another route to have kids. And in a way, they've already given me a new life, one more satisfying than I had ever imagined.