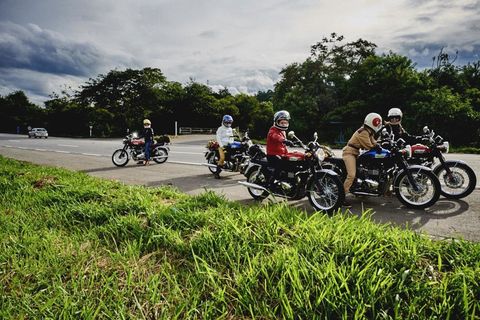 From Carioca beaches to mining mountains: Today, the L'equipee girls hit the road towards a charming small town inland, where they discovered Brazil's colonial past.

At 6:30a.m., the Ipanema apartment where the L'équipée were staying was as busy as ever, as the girls packed, studied their roadmaps, and checked the final details before hitting the road towards a deeper Brazil, far away from the hustle and the bustle of the cities.

Destination? Tiradentes (Minas Gerais), one of the most charming colonial cities. Now a tourist hot spot, the town was famous for its abundance of gold. On the one hand, this turned the town into one of Brazil's richest regions, but on the other hand, it attracted the Portuguese monarchy, who made its residents pay exorbitant taxes. These oppressive economic policies caused revolt among the people and resulted in the Minas Gerais Conspiracy, a liberation movement to free themselves from the Portuguese.

Five women do not go unnoticed

After traveling for 320km on the busy BR 0-40 motorway, the girls found themselves surrounded by jaw-dropping and well-preserved colonial architecture, with a rich historical past. When they first entered the door of their rented house in Rua do Chafariz, many of the girls couldn't believe how beautiful it was.

"I was so excited that I even had a little lump in my throat," Cecile said.

Before reaching their destination, however, the girls had already made a pit stop at another poignant point in Brazil's past. They had self-serve lunch (typical of the region) in a modest restaurant in the center of Petropolis, a municipality in the interior of Rio where Dom Pedro II—the nation's second-king—once built a palace and other aristocrats followed suit. As they rode out, they caused quite the stir every time they stopped at a petrol station. (Who can blame the spectators? It's not every day you see a group of foreigners driving 70s-inspired motorbikes…)