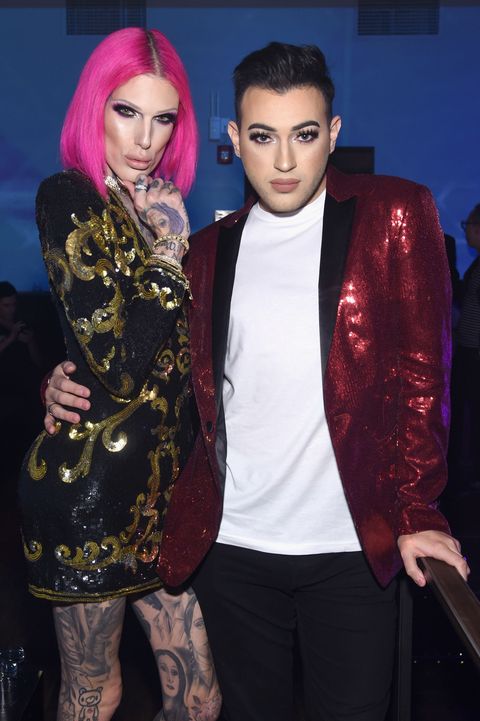 On April 3, as Jeffree Star and Manny MUA were getting ready to celebrate the launch of their first makeup collaboration, they were hit with a lawsuit.

The suit alleged that the logo for Jeffree and Manny's beauty collab—a holographic star and moon design—copied the logo for Black Moon Cosmetics. Suddenly, the collection's release on April 8 seemed in jeopardy. Not a great way to celebrate a project that had taken the two best friends longer than a year to realize.

At the collaboration's launch party that night in West Hollywood, California, the pair were in good spirits. It was Manny's birthday, after all. But aside from that, Jeffree wanted to "address the elephant in the room" and talk about the "crazy drama" that had happened that morning.

"His logo's been a moon for years and my logo's a star," Jeffree explained. "We combined them. It was easy—the stars and the moon align."

"It was a true collaboration," Manny said.

"So, sadly, someone had a similar thing," Jeffree said, but "everything is being handled legally. The collaboration's good. Everything's happening, and there's no more drama."

The fact that the lawsuit was filed at all—on launch day, no less—was "frustrating," Manny said, but it wasn't necessarily a shock. "A lot of people love to use my name for press, and they love to get dramatic," Jeffree said. "Coincidences happen, but I'm really happy with the way everything turned out."

Another guest pleased with the way things turned out was James Charles, who got to preview the collaboration a few days earlier and was into the "blinding" highlighter called "Eclipse," which was the first product Jeffree and Manny created together.

"I'm all about the blinding look," Jeffree said. "Not every girl wants that look, but that's what I'm obsessed with."

Helin Jung Helin Jung is a writer and editor based in Los Angeles.
Advertisement - Continue Reading Below
More From Beauty
How You Should Do Your Nails This Spring
Moroccan Gardens Hold the Secret to Good Skin
Advertisement - Continue Reading Below
This $10 Lip Tint Feels Like Jelly on Your Lips
13 Super Pretty Valentine's Day Makeup Tutorials
Hourglass' CEO Shares Her Morning Beauty Routine
All the Details on Brow Lamination
These Makeup Trends Will Dominate the Year
Yes, You Need a Silk Pillowcase
WORTH IT: La Mer Renewal Body Oil Balm
Shampoos to Make Your Hair Grow Super Fast