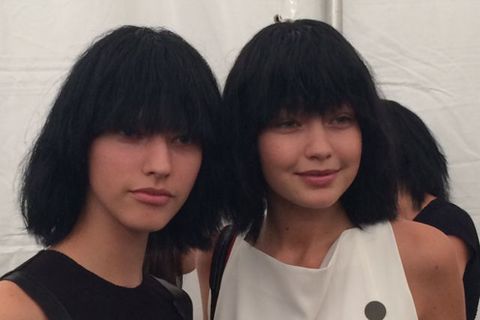 To close New York Fashion Week, Marc Jacobs took a trend we've been seeing everywhere and elevated it to a entirely new level. Would you expect any less from the designer? He sent his girls, which included Adriana Lima, Kendall, and Gigi Hadid, down the runway without makeup. Yup, absolutely none. No foundation, no mascara, no lip gloss—nothing.

Minimal makeup has been everywhere this fashion week, and it's no longer the fresh face that really takes 20 minutes to apply (and that we've been seeing the past few seasons). This new look is actually the result of using less product. We saw it at Proenza Schouler, BCBG, Jason Wu, and countless other shows. However, no one but François Nars of NARS Cosmetics (who spent his time backstage before the show making sure all the models were properly moisturized) opted for a truly blank canvas.

"I am probably the only makeup artist in the world who also loves women with no makeup," Nars told us before the show. "I don't like middle of the road. I like to go extreme whatever it is. Either lots of makeup for a strong look, or no makeup, which is also a strong look. If it works with the concept and the hair and the clothes, it's a great statement."

And, work it did. The #iwokeuplikethis face was a perfect complement to the Ramones-inspired, fringed bob wigs (this is the fourth season in a row Jacobs has opted for wigs) and utilitarian vibe of the line. "Marc sees them almost like an army of girls on the runway," explained Nars. "The colors of the clothes are really military: beige, khaki, camels, chocolates. The actual color comes from the set, which is quite bright. So the makeup is actually on the house, not on the girls."

We can definitely get behind this trend. Not only because it's easier and so low-maintenance, but because it's also empowering. "In 2014, it's great that we are doing this," Nars said. "In the '60s, '50s, and '40s, women had to wear makeup. It was a rule. Today there are no rules: You can do anything you want."