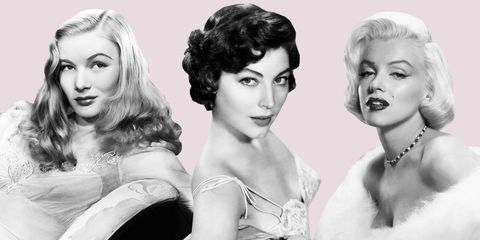 Take a look at the silver screen's most iconic beauties, and you'll notice they all have one thing in common: pretty, look-at-me arches. (All that vamping and expressing and capital-A Acting just wouldn't be possible without 'em.) What's equally apparent is that brows are not a one-shape-fits-all feature. Here's how Hollywood legends tailored their brows to their look—and what you can learn from their arch-boosting techniques.

Bombshell Marilyn Monroe is known for her voluptuous physique. What may be less obvious is that her soft curves extend to her face. "She doesn't naturally have a very pronounced jawline or cheekbones," says New York City-based makeup artist and brow pro William Scott. That's where her hyper-defined brows come into play: Strong arches compensate for less-than-chiseled cheekbones. They add structure to her face, Scott says, and broadcast that this is one bombshell who calls the shots.

The angle-free advantage: Curved brows make you look decadently relaxed all the time, even if you're a HBIC under mega-pressure. And in the case of screen star Hedy Lamarr, the shape softens her face. "She has raven black hair and a strong forehead and jaw," Scott notes. "Pointy brows would look very sharp and hard on her."

Katharine Hepburn is using a tried-and-true makeup trick here. "Lengthening the tail end of your brows lifts the eyes and adds drama to the face," Scott says. Since Hepburn's a star on screen and stage, she goes for a theatrical length and height, aiming her brow at her temple. For an everyday eyelift, aim the tail at the upper ear, Scott suggests. Use a pencil like Maybelline New York Brow Precise, and don't go quite so far unless you're in fact a drama queen, too.

Ingrid Bergman's beautifully unkempt brows may hail from the 1940s, but they would fit right in circa 2015. "They look completely natural," Scott says. Feathered arches have a laissez-faire, I-woke-up-like-this appeal, though in truth they require a bit of work. To regain some growth, stretch your grooming sessions to every eight, instead of six, weeks (except for plucking obvious strays), Scott says. Then brush them up daily with a spoolie. If, unlike Bergman, your tails are too sparse, fake some fullness there with a colored brow gel, such as Maybelline New York Brow Drama.

"Audrey Hepburn's brows are amazing," Scott says. "They're very, very full." They're also very straight, with only a slight arch pulled out toward the outside of her face. Why it works? This regal screen goddess won the cheekbone and jawline lottery; she doesn't need an uber-arch to amp up her facial definition. Leaning towards a flatter arch also keeps extra-full brows delicate-looking.

Gene Tierney's ultra-sculpted brows look like they've been tweezed to shift the arch toward the center, powdered to fatten them up, and, lastly, penciled in, Scott says. As a result, you can't help but notice them: Highly-manicured brows make the eyes the focal point of the face. To achieve this look at home, use Maybelline New York Brow Define + Fill Duo, a dual-ended pencil with a powder on one end and a pencil on the other. Pat on the shadow to create your shape, then use the pencil end to draw in feathery, hair-like strokes. For a seamless finish, always brush through brows with a spoolie as a final step.

Ava Gardner has big, almond-shaped eyes, so her brows don't need to work overtime to draw attention to her peepers. "When you simply want to complement your eyes, following the natural shape of yours brows works best," Scott says. Gardner may not feel compelled to make her brows sharper or longer, but 'natural' doesn't mean foregoing a boost altogether: A little soft penciling adds fullness. 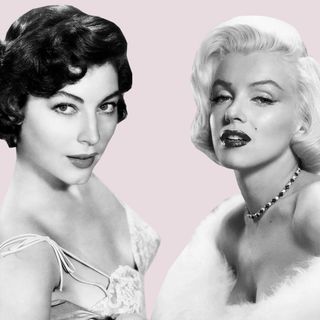 Advertisement - Continue Reading Below
This content is created and maintained by a third party, and imported onto this page to help users provide their email addresses. You may be able to find more information about this and similar content at piano.io
More From Makeup
The Foundation Brushes the Pros Are Obsessed With
The Eyeshadow Palettes Beauty Editors Swear By
Advertisement - Continue Reading Below
Easy (But Gorgeous) Halloween Makeup Ideas
The Lip Balms That'll Save Your Dry, Chapped Lips
Easy At-Home Brow Tints That Really Work
Magic Concealers to Buy in Bulk
Lengthening Mascaras for Your Longest Lashes Ever
Our Favorite Self-Tanners for Dark Skin Tones
Editor-Approved: The Best No-Streak Self-Tanners
Liquid Eyeliners That'll Last All Day (and Night)