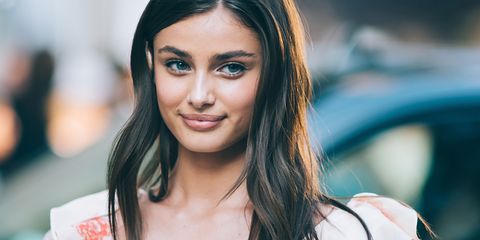 The way the memes tell it, we are all struggling massively with sleep deprivation and social anxiety, but that can all be cured if your left eyebrow (lives in parents' basement, considers Fanta part of her five-a-day) ever comes close in fullness and thickness to your right (did Whole30 without whining about it, goes to the gym every day, even weekends). After your arches are finally feathery and matching in a vague, sisterly way, the world will then be revealed to you, and you will never again know unhappiness. Or so they say.

Given that the pursuit of bushy, sprouted (those tufts at the inner corners) brows is so prevalent today, you've probably already put yours on a strict diet of no tweezing, daily filling-in, and maybe-too-constant mirror observation. Same! But why don't they look like hers?

Because Sometimes You Weren't Born with It

So you gotta cheat it. On LPA designer Pia Arrobio's (indirect) recommendation, I've been using GrandeBrow, the companion to the brand's runaway-best-selling lash serum. Paint the formula on any gaps, the sprouts, and at the ends to strengthen the line up to twice a day, and you'll see improvement within a few weeks. (Be careful where you direct the brush and allow time for drying, though—that stuff's so powerful, I've definitely found errant hairs far too close to my lids.)

Because Your Regimen Is Missing an Important Piece

And that is again a clean mascara wand and more obsessive behavior. According to the Beauty Department, you can retrain your hairs to grow in the desired direction by brushing them up and out multiple times a day. (We never said this wasn't extra.) Shape = just as important as length.

Because You're Not Committed Enough

As with exercise and wearing down your crush until he or she like-likes you back, persistence is key. That's why, more than anything, keeping at it is the one true secret to growing your brows. You have to apply your chosen growth aide religiously. You must brush your brows as often as you do your teeth. But if consistency isn't a strong suit, at least we'll always have pencils and powders.