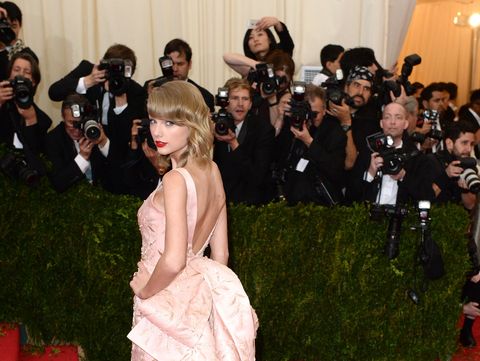 Since pretty much everyone was at the Met Gala Monday night (and naked, no less), it was actually quite easy to pick out those A-listers who didn't show up. Blake Lively, Taylor Swift, Gwyneth Paltrow...where were they? Well...

We were less than surprised that she didn't grace the red carpet with her Goopiness—back in 2013, Paltrow said with her typical candor that the event had "sucked" and that she'd never return. She has since made good on her promise, and while her BFF Beyoncé was owning the event in her sheer getup, she was hanging out with her daughter, Apple.

Meanwhile, where can we get those dinosaur slippers?

She has attended the ball several times, usually in a very Old Hollywood-inspired getup (like last year's blush-colored Gucci number). But Lively skipped out on the China-themed gala this year because she was actually in China. "Blake RSVP'd a month ago and said she couldn't make it," her rep told Page Six. "She is shooting back-to-back movies in China and Bangkok." Fair.

We totally expected Tay to walk up those stairs in some magnificent sparkly crop top number, but alas—like Lively, Swift is currently across the globe on her 1989 tour. She spent the evening in Tokyo rather than on the Met steps, but still wore her fair share of fantastic outfits, including the wonderfully blingy catsuit that looks just like the one bestie Karlie Kloss wore on the Victoria's Secret runway where the pair first met.

While Bündchen has walked many a Met gala carpet, she was also in Asia this year: South Korea, to be exact, for Chanel's Cruise collection runway show. It's not the first time Karl Lagerfeld has made the fashionable elite choose between Chanel and another big event, so kudos to Gisele for making the trek, which even Cara Delevingne didn't do. And bonus points, because there were still steps involved!

We thought we might see the fashionable actress join the rest of the A-list crowd, but she also opted for Chanel's event instead—which makes sense considering she's a face of Chanel, and seems much more her speed anyway, since she usually tries to avoid the hubbub.

See Every Look From The 2015 Met Gala

The Hottest Couples at the 2015 Met Gala

Everything Your Favorite Stars Have Ever Worn to the Met Gala

Victoria Dawson Hoff Associate Editor Victoria Hoff is the associate editor at ELLE.com, covering everything from fashion to beauty to wellness.
This content is created and maintained by a third party, and imported onto this page to help users provide their email addresses. You may be able to find more information about this and similar content at piano.io
Advertisement - Continue Reading Below
More From Celebrity
Britney Spears Dedicated a Message to Her Sons
Meghan's Face "Lights Up" When Harry Walks In
Advertisement - Continue Reading Below
Kate Middleton, Millennial, Wore Skinny Jeans
'Sex and the City' Star Willie Garson Dies Age 57
Princess Eugenie's Son Got to Meet Prince Philip
Ashley Graham Is Having Twin Boys
Gabrielle Union Danced Topless at a Window
Ben Affleck Is "in Awe" of Jennifer Lopez
Princess Beatrice Has Given Birth to a Baby Girl
Gigi Hadid's Mom Shared Sweet Pics of Khai