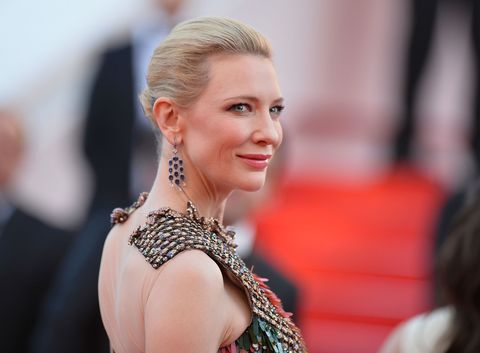 Update, 5/18: Cate Blanchett is setting the record straight—no, she has not had sexual relationships with women. At a Cannes Film Festival press conference for her new film Carol, the actress explained how the reporter mixed up her words:

She later addressed today's LGBT climate, saying that people still have a ways to go until everyone can live as their true selves. "We're living in deeply conservative times," she said. "And if we think otherwise we're being very foolish."

Original story, 5/12: Cate Blanchett gave us all a reason to celebrate today when she told Variety that she's dated women before—"many times," in fact. The piece reads:

When asked if this is her first turn as a lesbian, Blanchett curls her lips into a smile. "On film—or in real life?" she asks coyly. Pressed for details about whether she's had past relationships with women, she responds: "Yes. Many times," but doesn't elaborate.

The quote was said in passing while promoting her new film about a lesbian romance, Carol, which is premiering at Cannes Film Festival on May 17.

It's been a huge month for fluid sexuality mentions. Last week, Miley Cyrus said she's not straight and doesn't want to be labeled, and now Blanchett (who is currently married to filmmaker Andrew Upton) says she's dated women lots of times.

It's becoming a better world every day.

This content is created and maintained by a third party, and imported onto this page to help users provide their email addresses. You may be able to find more information about this and similar content at piano.io
Advertisement - Continue Reading Below
More From Celebrity
Meghan's Heartfelt Father's Day Gift for Harry
Sophie Turner Shared a Sweet Unseen Pregnancy Snap
Advertisement - Continue Reading Below
The Queen Has a Collection of Dog Toys for Sale
Meghan Revealed the Nod to Diana in 'The Bench'
Celebs Are Posting Tons of Father's Day Tributes
Will Spent Father's Day with George and Charlotte
Charles Won't Allow Archie to Become a Prince
Royals Had Several Talks About Archie's Skin Color
See Blake Lively's *Impressive* Watermelon Cake
Prince Charles Cant Deal with Harry's Criticisms