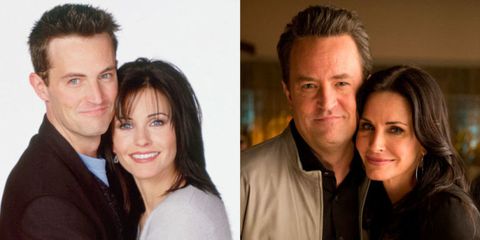 Update, 12/18: Terrible news today for Friends fans after yesterday's rumor mill was just so glorious. Matthew Perry and Courteney Cox are *not* dating, ET reports. A source close to the former co-stars says it's just not true—so if you need me, I'll be right here.

Original story, 12/17: It's a Friends fanatic's dream come true: Courteney Cox and Matthew Perry, aka Monica Geller and Chandler Bing, are rumored to be together IRL! They've been linked in a new dating rumor that's probably totally made up, but CAN YOU IMAGINE??? I mean:

*Chandler voice* Could they BE any more perfect??

According to "reports," after Courteney and Snow Patrol guitarist Johnny McDaid called off their engagement earlier this month, she turned to her former TV husband. He hasn't been linked to anyone since he split up with Lizzy Caplan in 2012.

Some unnamed "source" revealed Matthew invited Courtney over "to talk" (which is even worse than asking someone to come over to "watch a movie," TBH) which led to them hooking up. It's a tale rooted in decades of actual friendship: "They've leaned on each other before, during her infertility struggle and his battle with addiction," the source said. Unfortunately, there aren't any Harry and Pippa–level details about their rendezvous, but we will indulge in the fantasy, regardless, and just project our own:

Will they decide to not invite Jennifer Aniston to their wedding because she didn't invite Matthew to hers and Justin Theroux's this past summer? Or is that totally awk because Courteney and Jennifer are maid-of-honor-level besties in real life? What about the proposal–will Courteney be the one to do it???