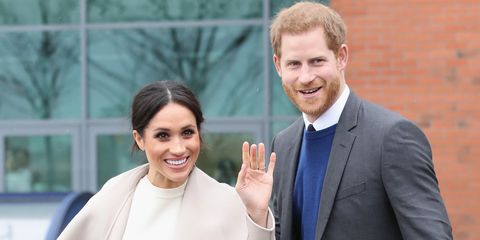 Remember Meghan Markle's estranged family members? You know, the ones that appeared on live TV to announce that they hadn't been invited to the royal wedding, putting aside the fact that they hadn't seen Markle for 20 years? Good news—they're going to the wedding, after all!

While Tracy and Tyler Dooley haven't received invitations to the big day, according to Us Weekly, they "will be flying down to London to be TV wedding correspondents" on May 19. And that's not all. Apparently Markle's half-sister, Samantha Grant, who is famously writing a "memoir" called The Diary of Princess Pushy's Sister, will also be a correspondent.

According to Us Weekly, a source has revealed, "Meghan is really worried about some these members of her family. She hasn’t spoken to them in years." While she's avoiding "paying attention" to the drama they're creating, it's on her radar.

Tyler Dooley is technically Markle's nephew, while Tracy is his mother, and Markle's ex-sister-in-law. Yes, the connection is a little tenuous. Which is why it's unsurprising that Tracy hasn't spoken to Prince Harry's fiancée for two decades.

Speaking on British breakfast news show, Good Morning Britain, this week, Tracy revealed, "I don't think we are going to get the invitations–and that's fine. We're okay with that. We're still supporting her on. We're so proud of her."

Markle's nephew, Tyler, apparently spoke to her a little more recently, around three years ago. Of his aunt, he told the interviewers, "We've been here from the beginning, her whole life, just always rooting her on and supporting her."

Unfortunately for Tracy and Tyler, the show's host was less than impressed, and had a brutal response to the pair's claim they should be invited: "Well, then it doesn't seem unreasonable for you not to be invited, does it? I mean, if it's twenty years, you're pretty much on the fringes, aren't you, of the family, to be honest?"

However, it sounds as though they'll be attending the royal wedding on their own terms.