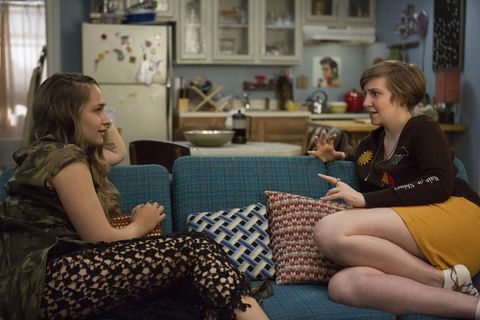 Lena Dunham's HBO hit Girls is ending after Season 6, but if Dunham's latest Instagram posts are any indication, it won't be like any other season we've seen so far. Specifically, it seems like at least one episode will take the titular girls to Florida. Dunham posted a picture of herself relaxing on a boat in a fun two-piece with the caption, "#girlsdoesflorida."

Dunham followed the picture up with another post that appears to be from the same day (same boat, same swimsuit), also hashtagged #girlsdoesflorida. "I'm a lifestyle blogger now. People love it!!! They love the sporty lifestyle! #girlsdoesflorida," the full caption reads.

While we don't know what exactly could drive Dunham's Girls character, Hannah Horvath, to the Sunshine State, we can't say we're complaining. Girls has never felt the need to confine its storytelling to New York, even though the city does serve as the primary setting for the series. Remember Hannah's arc in Iowa? Shoshanna's time in Japan? Whatever takes Hannah and Co. (or just Hannah, if that's the case) to Florida, we're ready to follow.

Kayleigh Roberts Kayleigh Roberts is the weekend editor at Marie Claire, covering celebrity and entertainment news, from actual royals like Kate Middleton and Meghan Markle to Hollywood royalty, like Katie Holmes and Chrissy Teigen.
Advertisement - Continue Reading Below
More From Celebrity
Kate Middleton & Michelle Obama Use This $64 Cream
A Full Timeline of Tyler C. & Hannah B.
Advertisement - Continue Reading Below
Blake and Ryan Donate $400K to NY Hospitals
Prince William May Work as an Air Ambulance Pilot
Harry Is Likely to Get U.S. Diplomatic Status
Harry Was Forced to Give Up His Military Titles
Ariana Grande Revealed Her Natural Curls
Fans Love This Accident Meme of Queen Elizabeth
Kate and Will Are Symbolically Leading Monarchy
Meghan & Harry Posted Their Last Sussex Instagram