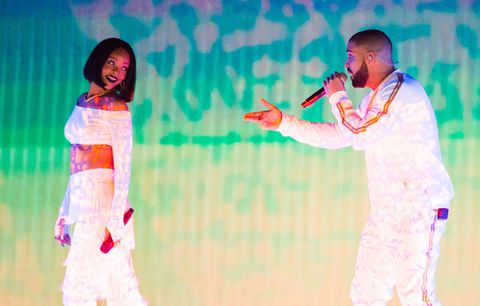 Rihanna will receive the Video Vanguard Award at Sunday night's MTV Video Music Awards, the show's highest career honor given to artists who have made a great impact on culture. Drake gets that this is a very big deal, so he went ahead and bought an entire billboard to congratulate her. Black-ish star Yara Shahidi shared a glimpse of it on Twitter:

And Rihanna posted it too on her Instagram, with a nice little caption:

Drake and Rihanna—"the most beautiful, talented woman I've ever seen in my life," as he regularly introduces her at all the shows they do together—have never actually confirmed they're dating.

Rihanna is confirmed to be at the VMAs Sunday night; Drake most likely will be too as a contender for Video of the Year. Rihanna will perform a medley of her hits, and VMA executive producer Jesse Ignjatovic has already confirmed to Entertainment Weekly it'll be "one of those holy crap VMA moments." So chances are good, given these two's "Work" duet history, that Drake will be some part of it.

Alyssa Bailey News and Strategy Editor Alyssa Bailey is the news and strategy editor at ELLE.com, where she oversees coverage of celebrities and royals (particularly Meghan Markle and Kate Middleton).
This content is created and maintained by a third party, and imported onto this page to help users provide their email addresses. You may be able to find more information about this and similar content at piano.io
Advertisement - Continue Reading Below
More From Celebrity
Travis Covered His Ex' Name With Tattoo for Kourt
Kendall Jenner Wore a Bedazzled Pink Cowboy Hat
Advertisement - Continue Reading Below
Kourtney & Travis Will Def "Have a Baby Together"
Britney Is Done With "Rude, Humiliating" Family
Ben & Jen Are Meeting Up "Whenever Possible"
Anna Kendrick Looked Pretty in Pink at a Premiere
John Mulaney & Olivia Munn Might Split Up: Source
The Sussexes Worried Archie Would Attract Mockery
Diana Would Be "Thrilled" for Harry and Meghan
'Friends' Actor James Michael Tyler Has Died at 59