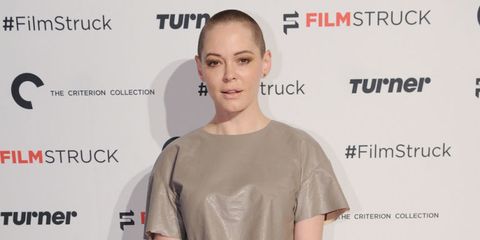 In the wake of a growing national conversation about rape culture, actress and activist Rose McGowan has spoken up about her personal experiences with sexual assault in a series of recent tweets. According The Hollywood Reporter, McGowan tweeted as part of the trending #WhyWomenDontReport hashtag and all but named a Hollywood executive she says raped her.

In a series of tweets Thursday night, McGowan shared her story and her own reasons for not reporting or going public with it sooner. "A (female) criminal attorney said because I'd done a sex scene in a film I would never win against the studio head," she wrote.

McGowan referred to her assault as an "open secret" in Hollywood before calling for "some goddamned honesty in this world."

a (female) criminal attorney said because I'd done a sex scene in a film I would never win against the studio head. #WhyWomenDontReport

because it's been an open secret in Hollywood/Media & they shamed me while adulating my rapist. #WhyWomenDontReport

It is time for some goddamned honesty in this world.

Kayleigh Roberts Kayleigh Roberts is the weekend editor at Marie Claire, covering celebrity and entertainment news, from actual royals like Kate Middleton and Meghan Markle to Hollywood royalty, like Katie Holmes and Chrissy Teigen.
Advertisement - Continue Reading Below
More From Celebrity
Prince Harry and Meghan Markle's 53 Cutest Moments
RiRi Was Shocked by the Reaction to Fenty Beauty
Advertisement - Continue Reading Below
Behold: Celebrities Who Dated Normals
Kate Middleton & Michelle Obama Use This $64 Cream
A Full Timeline of Tyler C. & Hannah B.
Blake and Ryan Donate $400K to NY Hospitals
Prince William May Work as an Air Ambulance Pilot
Harry Is Likely to Get U.S. Diplomatic Status
Harry Was Forced to Give Up His Military Titles
Ariana Grande Revealed Her Natural Curls