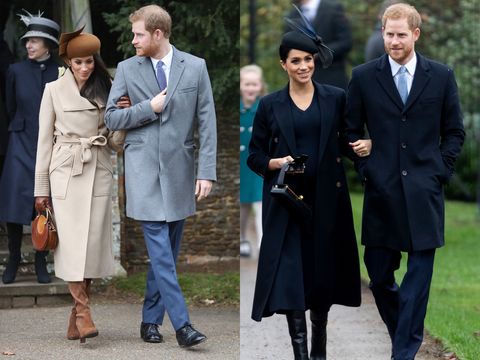 It's been a big year for Meghan Markle, to say the least. The former Suits actress got married to Prince Harry in a ceremony that was watched and celebrated literally around the world, went on her first royal tour, became a best-selling author, and found out that she was pregnant with her first child.

So much has happened with Meghan, in fact, that it's hard to believe it's only been a little more than a year since she and Harry got engaged and her place as a future royal-by-marriage was announced.

Last year, Meghan royal protocol was broken in a big way when the Queen made an exception and invited her to spend Christmas with the Windsor fam in Sandringham (typically, only formal spouses are invited to the festivities).

This year, Meghan stepped out for her second Christmas with the royals with a lot more experience—not just with the family on a personal level, but with many more public appearances as a member of The Firm under her metaphorical belt (the Duchess of Sussex opted for an un-belted coat this year, because during pregnancy more than ever, comfort is key).

We spoke to body language expert Patti Wood about how Meghan's demeanor with the royals has changed in the last year.

One of the first things Wood noticed about Meghan this year is how much more she seems to feel like part of a bigger unit and not just Harry's date. Whereas last year, she stayed very close to Harry, this year, Meghan is bridging the gap more with her body.

"Meghan's a little bit further away from Harry as she's walking, but I think that's to be part of a unit, for [Harry and Meghan] to be part of a unit," Wood says. "So, that's not saying that there's something wrong with them as a couple, it's saying that before, it was all about the couple and here they're walking all across and she's cognizant of being in a unit," i.e. the royal family.

Christmas 2018 as a unit
Getty Images

She was shy last year and now she's much more confident.

Another difference Wood points to is Meghan's confidence level, which can be seen in how she literally held her head higher this year. Last year, Meghan was snapped looking down to the ground several times during the Christmas outing. This year? Not so much.

"If you look at the photos from last year, you can see how often her head is down," Wood says. "She has a tiny bit of that this year, but overall her head is up and elongated. She was shier last year. She was more hesitant."

Another difference? This year, Meghan was much more willing to allow some space between herself and Harry.

"Last year, she was a little shier and more submissive last year and a little closer to Harry," Wood adds. "Just slightly closer. She would try to get the space between them to be less."

It seems Meghan is settling nicely into life as a royal, confident (as she should be) in her ability to represent the family to the world.

Related Stories
Body Language Expert on Kate and Meghan Feud Rumor
Heartbreak Bonded Meghan Markle and Prince Harry
Kayleigh Roberts Contributor Kayleigh Roberts is the weekend editor at Marie Claire, covering celebrity and entertainment news, from actual royals like Kate Middleton and Meghan Markle to Hollywood royalty, like Katie Holmes and Chrissy Teigen.
This content is created and maintained by a third party, and imported onto this page to help users provide their email addresses. You may be able to find more information about this and similar content at piano.io
Advertisement - Continue Reading Below
More From The Ultimate Guide to the Royal Family
Meghan and Diana Had Similar Issues with the Queen
The Queen Insisted on Cutting a Cake with a Sword
Advertisement - Continue Reading Below
Harry Texted Kate, Not Will, When Lili Was Born
Kate's Kids Want Her to Stop Taking Their Pictures
Kate Wore a Pearl Bracelet That Used to Be Diana's
Harry's HRH Title Was Removed from a Diana Display
Harry and Meghan Are Trying to Keep the Peace
Films That Pull Back the Curtain on Royal Life
Harry Was Left to Suffer After Diana's Death
How Queen Elizabeth II Got the Nickname Lilibet