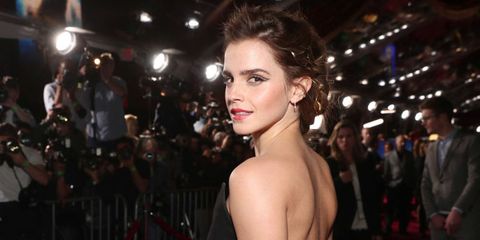 Emma Watson found herself at the center of a very silly controversy earlier this week when some internet trolls and also a few journalists decided that the actress's March Vanity Fair cover, in which she appears wearing a top that shows off her breasts, meant she was a bad feminist.

The charge was led by journalist Julia Hartley-Brewer, who tweeted, "Emma Watson: 'Feminism, feminism... gender wage gap... why oh why am I not taken seriously... feminism... oh, and here are my tits!'"

Emma Watson: "Feminism, feminism... gender wage gap... why oh why am I not taken seriously... feminism... oh, and here are my tits!" pic.twitter.com/gb7OvxzRH9

In response, ELLE.com's Jaya Sexena noted that women "have both minds and bodies, and denying one in favor of the other denies the wholeness of any person," and went on to point out that "It is, of course, not Emma Watson's responsibility to singlehandedly solve questions of feminist theory."

Watson, who has long championed women's rights, addressed the brouhaha herself, telling Reuters, "Feminism is about giving women choice, feminism is not a stick with which to beat other women with, it's about freedom, it's about liberation, it's about equality. I don't really know what my tits have to do with it."

She also said that she was "thrilled about how interesting and beautiful the photographs were."

So can we declare this non-controversy over now?

This content is created and maintained by a third party, and imported onto this page to help users provide their email addresses. You may be able to find more information about this and similar content at piano.io
Advertisement - Continue Reading Below
More From Celebrity
Surprise—Halsey Is Pregnant With Her First Child
Um, Why Is the Weeknd's Face Bloody and Bandaged?
Advertisement - Continue Reading Below
Your First Look at Kristen Stewart as Diana
47 'Friends' Facts Every Superfan Should Know
Eugenie Shared a Rare Candid Snap With Her Husband
Why Serena Didn't Want Olympia to Play Tennis
J.Lo Talked Botox Claims: "Don't Call Me a Liar"
Kate Has Her Own Direct Line to the Queen
Megan Thee Stallion’s Hottie Bootcamp Is Intense
Katie Holmes' Mango Puffer Coat is a Winter Staple