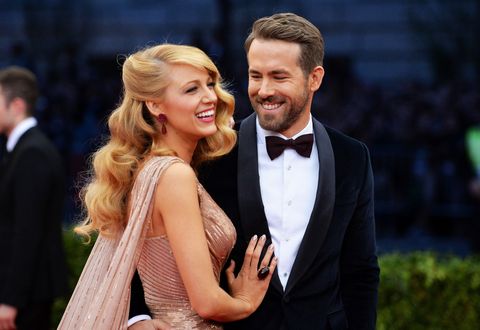 Forget Ryan Reynolds' complaints of traveling with his young kids—it was always going to be his comments about Jake Gyllenhaal being a slightly better cook than wife Blake Lively that were going to land him in a bowl of piping hot rabies...

In an appearance on Good Morning America to promote his new movie Life, he foolishly, foolishly mention that costar Jake may be a "little bit better" in the kitchen than noted foodie Blake.

Speaking to E! Online, he teased: "Funny enough, I'm actually living right now in an actual dog house. Baxter is usually staying in there, but he's moved out for now. He's been upgraded to the main bed."

The Deadpool star then backtracked and admitted he wasn't "totally" in Baxter's bed because both Blake and Jake (lol) are extremely competitive when it comes to cooking. So he basically had to choose one or the other...

"I wasn't totally in the doghouse because they get competitive with the cooking," he explained. "They're both incredibly accomplished chefs."

And just when it seemed as though Ryan had been given a shovel to dig himself out of a marital hole, he went on to compliment Jake's cooking talents. Again.

"You do simple stuff, really," he said to the Nightcrawler star. "I'm serious. You've made salmon and steak. Those things are really good. I'm simple; like bowls of cereal I'll do really well. He's very good at the staples."

But he eventually settled on a good 'un, enthusiastically commenting: "Have you seen the guy's calves? His Achilles and his calves are unmatched."

That was probably worth sleeping next to Baxter for...

This content is created and maintained by a third party, and imported onto this page to help users provide their email addresses. You may be able to find more information about this and similar content at piano.io
Advertisement - Continue Reading Below
More From Celebrity
Celebs Are Posting Tons of Father's Day Tributes
Charles Won't Allow Archie to Become a Prince
Advertisement - Continue Reading Below
Royals Had Several Talks About Archie's Skin Color
See Blake Lively's *Impressive* Watermelon Cake
Prince Charles Cant Deal with Harry's Criticisms
Serena Gave Daughter Olympia a Tennis Lesson
Meghan Shared What Helped Her Through 2020
Kylie and Travis Are "Very Close" After Reuniting
Meghan's Book 'The Bench' Tops Best Sellers List
Kaavia Talks to a Bee in an Adorable IG Video