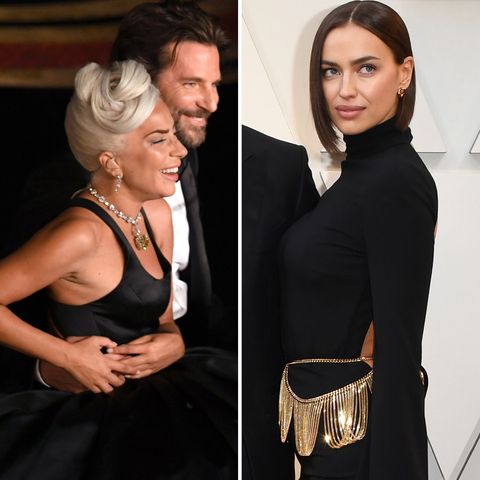 Lady Gaga and Bradley Cooper brought the house down at the Oscars (and nearly broke the Internet) with a chilling and intimate live performance of "Shallow" from A Star Is Born. The duo got up from their seats together, approached the stage hand-in-hand, sang their hearts out, and even got close on the piano bench together while delivering their last notes. But how did Cooper's girlfriend, Irina Shayk, feel about the set?

Apologies in advance to Oscar viewers looking for drama; it seems Shayk was nothing but proud of her man's performance with Mother Monster. She was one of the first to stand give the costars a standing ovation once their set was done, according to video shared by The Hollywood Reporter's Chris Gardner.

If you look at the front row, Shayk stands up to clap in her long sleeve backless dress and blunt bob.

In fact, after Gaga came back to her seat after winning her Oscar, she and Shayk hugged at their seats.

Shayk, Cooper, and Gaga were all seated together in the front row of the ceremony, with the model placed between her man and the singer-turned-actress. The seating arrangement had Twitter users speculating about possible tensions, but the Shayk's reaction to the duo's set just shut all of that gossip down.

Erica Gonzales Erica Gonzales is the Senior Culture Editor at ELLE.com, where she oversees coverage on TV, movies, music, books, and more.
This content is created and maintained by a third party, and imported onto this page to help users provide their email addresses. You may be able to find more information about this and similar content at piano.io
Advertisement - Continue Reading Below
More From Celebrity
Olivia Munn Doesn't Care About "Settling Down"
These 83 Twitter Accounts Harass Meghan Markle
Advertisement - Continue Reading Below
Adele's Ex Came to a Special Taping of Her Album
Kristen Stewart on a "Spooky" Moment Playing Diana
Travis Covered His Ex' Name With Tattoo for Kourt
Kendall Jenner Wore a Bedazzled Pink Cowboy Hat
Kourtney & Travis Will Def "Have a Baby Together"
Britney Is Done With "Rude, Humiliating" Family
Ben & Jen Are Meeting Up "Whenever Possible"
Anna Kendrick Looked Pretty in Pink at a Premiere