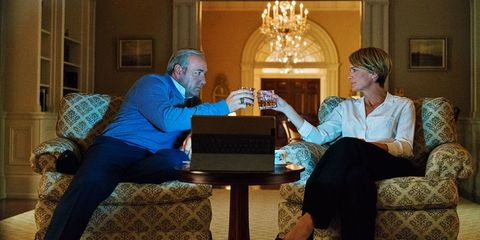 House of Cards has always been a terrifying show. But throughout its first four seasons, it always had the feel of something akin to a political soap opera—a story so twisted and sadistic it couldn't possibly be true. These morally bankrupt monsters who haunt our political system couldn't possibly be as bad as they're depicted in the award winning Netflix series.

But, when it returns on May 30, House of Cards no longer entirely feels like the stuff of fantasy. The political system upon which the show is based has been fundamentally broken since Season Four premiered last year. American government suddenly feels dangerous, populated at its highest levels by men unashamed to hide their motives, their many ethical compromises, and their unquestionable lust for more power.

In the trailer for Season Five, Kevin Spacey's Frank Underwood, along with his wife Claire (Robin Wright), imagine "One nation... Underwood." And they'll do whatever it takes to get there.