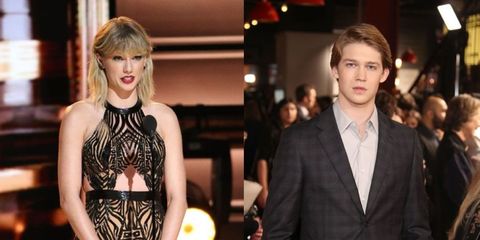 Yes, according to Metro, T-Swift has found her latest love in the form of 26-year-old British actor Joe Alwyn, who still lives with his parents. (Again, apparently.) The Sun is also claiming that Swift has been dating Joe for a while, and has even booked herself a temporary London apartment so that the couple can spend more time together. It must be serious.

This reported romance is more hush-hush than we're used to, because Taylor's love life is usually public knowledge—whether the couple wants it to be or not. However, friends of the couple have been quoted in Metro denying that Taylor and Joe attempted to keep their blossoming relationship a secret.

Although Swift is famous for turning her relationships into songwriting fodder, her exes are usually a little less forthcoming about information. Take Harry Styles, for example.

During an appearance on Radio 1 to promote his debut solo album, Nick Grimshaw pushed Styles into revealing whether the track "Two Ghosts' was about his ex, as people reckon. Unfortunately, Harry was pretty cagey about the whole thing. "I mean, I think it's pretty like self-explanatory," he (sort of) explained.

"I think, y'know it's about sometimes things change and you can do all the same things…and sometimes it's just different, y'know." (We don't.)

Both Taylor's and Joe's representatives have been reached for comment. 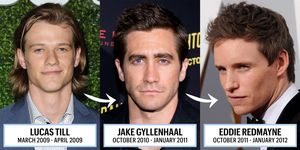 This content is created and maintained by a third party, and imported onto this page to help users provide their email addresses. You may be able to find more information about this and similar content at piano.io
Advertisement - Continue Reading Below
More From Celebrity
This Is Dax and Kristen's Approach to the Sex Talk
Angelina Jolie Dodged a Question About The Weeknd
Advertisement - Continue Reading Below
Kourtney and Travis Want a "Destination Wedding"
Harry Panicked About the Queen's Hospital Stay
Olivia Munn Doesn't Care About "Settling Down"
These 83 Twitter Accounts Harass Meghan Markle
Adele's Ex Came to a Special Taping of Her Album
Kristen Stewart on a "Spooky" Moment Playing Diana
Travis Covered His Ex' Name With Tattoo for Kourt
Kendall Jenner Wore a Bedazzled Pink Cowboy Hat