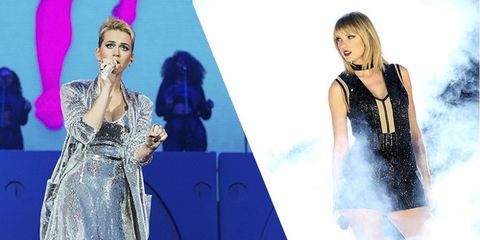 The timing was suspicious mainly because Taylor made a major stand against streaming services like Spotify three long years ago, so any return to non-Apple services was bound to be huge news. So why now, and why specifically on the same date that Katy Perry was debuting her own new music on Spotify? That question was put to Katy in a TV interview Monday.

The Today Show's Natalie Morales dropped by the L.A. house where Katy is live-streaming her life to promote her record, and asked if she suspected Taylor was specifically trying to sabotage her.

"I don't know," the singer admitted after a pause, adding: "I can only do me."

Morales also pressed Katy on her own perceived provocation, asking whether latest diss track "Swish Swish" was meant as payback for "a certain someone" (AKA Tay-Tay).

"No, it's not about anyone in particular," Katy insisted. "And I've said that on the record…That might be your story but my story, which I know is true for me, is that I've had not just one person bully me or one person hold me down or met one troll."

For her part, Katy really does seem keen to put the feud behind her once and for all. Over the weekend, she actually publicly apologized to Taylor for any animosity in the past…and even went a step further.

"I love her, and I want the best for her," Katy went on to say. "And I think she's a fantastic songwriter, and I think that, you know, if we—both her and I—can be representatives of strong women that come together despite their differences, I think the whole world is going to go like, 'Yeah, well we can do this.' Like, maybe I don't agree with everything she does and she doesn't agree with everything I do, but I just really truly want to come together in a place of love and forgiveness and understanding and compassion."

Will Taylor return the olive branch? Only time will tell...