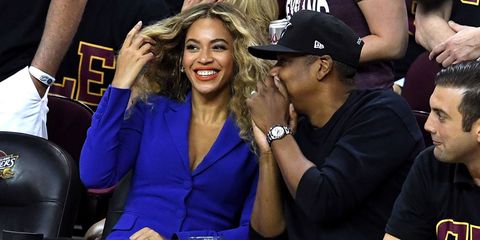 Rumors of Beyoncé and JAY-Z's twins' names were bound to start at some point, and it seems the first round of alleged monikers have arrived. Nothing has been officially confirmed by the family (or sources close to them) yet, but gossip sites are reporting that the Carters' newborn babies are named Shawn (JAY's real name) and Bea (pronounced "Bee" like Beyoncé).

It's likely the twins, who were born last week, weren't given those names at all. But if they're true, Shawn and Bea are sweet tributes to the Carter parents. They also mark a departure from fanciful celebrity baby names—say, Blue Ivy, for example.

Some people were in love with the names:

These twins names are really Shawn and Bea pic.twitter.com/SCuGAGi5VN

And some skeptical fans are waiting for official confirmation from the Queen herself:

Listen i been on Beyonces twins being Shawn and Bea since yesterday. This is OLD NEWS. FAKE NEWS. I NEED BEYONCE CONFIRMATION.

We'll be here waiting patiently for the Carters to officially announce the names of their newborns. (A few photos of the babies would be nice too.)