Keen-to-be-private couple Taylor Swift and Joe Alwyn have reportedly done another sneaky thing,The Sun is now reporting: They went to London earlier this month to hang with Alwyn's friends and family, and NO ONE KNEW, in part thanks to Swift's good friend Cara Delevingne. "Taylor made the trip to England to spend time with Joe's family and friends, and Cara offered to have them at her place in Chiswick [a West London neighborhood]," a source told The Sun's Dan Wootton (who broke the news the singer and the British actor were together back in May). "Obviously Taylor can stay at the world's swankiest hotels but that's not really her bag. She's trying to keep a low profile with Joe, and staying with Cara has let her do that."

While it's unknown whether Swift was out in disguise—the way was when she first started dating Alwyn—no one stopped her for selfies. She's been so lowkey that "they can even walk Cara's dog round the local park without anyone batting an eyelid."

Although Swift hasn't really said anything publicly about Alwyn (unless you count the lyrics of "…Ready For It?"), the two were first spotted in the same place last October. They've been dating for several months (maybe almost a year), and "things are getting serious between them, and Taylor wants to spend as much time getting to know Joe's world as possible," the source said. "They can't get enough of each other." 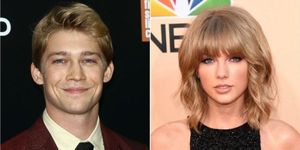 How Did Taylor Swift Keep Her Relationship Secret?

Just don't expect Swift, who is reportedly very happy to be doing the private relationship thing with her British beau, to tell you much about that anytime soon.

Alyssa Bailey News and Strategy Editor Alyssa Bailey is the news and strategy editor at ELLE.com, where she oversees coverage of celebrities and royals (particularly Meghan Markle and Kate Middleton).
This content is created and maintained by a third party, and imported onto this page to help users provide their email addresses. You may be able to find more information about this and similar content at piano.io
Advertisement - Continue Reading Below
More From Celebrity
Sam Asghari Opens Up About Britney Documentaries
Prince Harry’s Memoir Is Concerning Royal Insiders
Advertisement - Continue Reading Below
Meghan Markle Wore Some Familiar Earrings in NYC
Harry and Meghan Could Visit England for Christmas
Meghan Markle Looked Gorgeous at Global Citizen
Harry and Meghan Are Taping Their NYC Trip
Keep an Eye on Lady Louise Windsor
Princess Beatrice's Daughter May Get a Royal Title
James Middleton’s Wife Thought He Was a Waiter
Meghan Markle Got a New Nickname