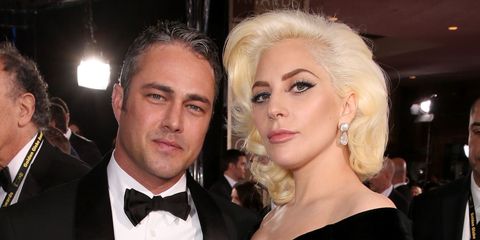 Lady Gaga boldly shares the heartbreaking reason behind her split from former fiancé Taylor Kinney in her new Netflix documentary. But arguably, the saddest moment in the film is when she receives flowers from the actor, with whom she parted in July 2016, on the day of the Super Bowl this year.

In Gaga: Five Foot Two, fans frequently see the 31-year-old star in immense physical pain as she is treated for fibromyalgia, a long-term condition that causes chronic muscle pain. But there's also a distressing scene which is just as hard to watch, in which we witness Gaga suffering from mental pain and anguish too.

Reflecting on her rocky relationship with actor Taylor while celebrating being cast in Bradley Cooper's A Star Is Born, Gaga tells her assistants: "I'm just at a different time in my life now, where I just feel like my threshold for bullshit with men is, just—I don't have one anymore.

"I don't know if it's because I'm 30, and I feel better than ever, you know? All my insecurities are gone. I don't feel insecure about who I am as a woman. I'm not embarrassed or ashamed of what I have. I just feel more sexy and sexual. All of that shit is better."

She briefly explains at the start of her film how she's endured painful breakups with partners during the highest peaks of her career, and it's upsetting to hear how her success has impacted her private life.

But it's on the morning of the Super Bowl that viewers see Gaga at her lowest point. After receiving bouquets of flowers and brightly colored balloons from friends to wish her good luck ahead of her performance, her assistant hands her a modest bunch of pink hydrangeas and roses with a small card attached.

The singer reads the message in silence and looks distraught, but she still attempts to make light of the situation, telling her team: "Well, nothin' like getting flowers from your ex-fiancé on the day of the Super Bowl." 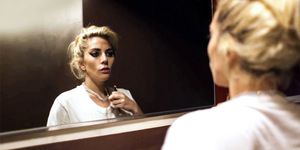 Lady Gaga Opens Up About Pain in New Documentary

Members of her team laugh along awkwardly to try and boost her morale, but it's evident that she's been unsettled by the gesture when she hugs the assistant who handed her the flowers for a very long time.

After throwing the flowers down in the sink, Gaga has a change of heart and announces instead: "Actually, we'll put them out. Nice and proud."

Viewers don't find out what Taylor wrote in the card, but it's sad that one of the biggest days of her career is almost overshadowed by her ex-partner.