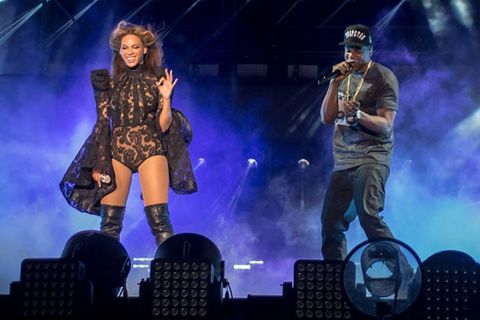 The video packages on show during Beyoncé and Jay Z's epic "On The Run" concert tour aren't just comprised of cutesy home videos and wedding footage, no, no. There's also a scandalous compilation of celebrity mug shots, which includes Jay Z's own booking photo, as well of those of folks including Bill Gates, Tupac, Robert Downey Jr., and look, Justin Bieber, following the latter's arrest for DUI and drag racing back in January:

BEYONCE SHOWED JUSTIN'S MUGSHOT AT HER CONCERT AND SAID "EVEN THE GREATEST FALL" pic.twitter.com/GQI5ivD7RW

Sadly, they did not feature the drag queen version of Bieber's mug shot; there were no LiLo photos in the mix either, which is always a shame. As the above tweet notes, Beyoncé sagely opined that "even the greatest fall" as the video played. Except not her, obviously, because she's surpassed greatness at this point. Anyway, this is a bit of a shady shout-out as much as you might say, "No, no, no, no, no shade," but it doesn't seem like Bieber is offended, so that's good — he even gamely retweeted a fan's mention of the moment. Of course, if the Biebs' next tour includes some of those infamous photos of Queen B during her 2013 Super Bowl performance, then we'll know his feelings really were hurt after all.

Quiz: How Much Do You REALLY Know About Beyoncé?

Alex Rees Deputy Editor of News I’m the news director here at Cosmopolitan.com, and I could really use a cup of tea right now.
This content is created and maintained by a third party, and imported onto this page to help users provide their email addresses. You may be able to find more information about this and similar content at piano.io
Advertisement - Continue Reading Below
More From Music
Princess Diana's Butler Talks 'The Crown'
Reese & Ryan's Son, Deacon, Drops His First Single
Advertisement - Continue Reading Below
Life Advice From an Icon, Cher
J.Lo Is Basically Naked on Her New Single Cover
Karaoke Songs Anyone (Yes, Anyone) Can Rock
Um, This Dude Claims Lady Gaga Stole “Shallow”
Sad Taylor Swift Is the Best Taylor Swift
Jennifer Lopez's NYC Concert Was Evacuated
Miley Cyrus Channels Britney Spears' Iconic Look
Ginger Spice Apologizes for Leaving Spice Girls