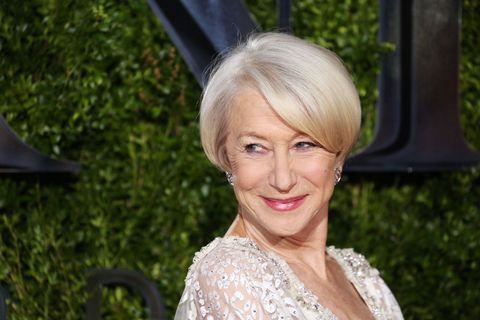 In a TV commercial for L'Oréal Paris that ran earlier this year, Dame Helen Mirren strolls along the Thames and checks out a guy wearing running tights because this new soya-peptide face cream she's been using makes her look and feel so much younger.

After watching this ad, some people apparently thought that, because she is a 69-year-old woman, she should really have many more lines around her mouth for this to count as honest advertising. Complainers complained, evidence (photos of her on the red carpet) was presented, and the UK's Advertising Standards Authority made a ruling.

"We (therefore) considered that the ads had not altered Ms. Mirren's appearance in a way that would exaggerate the likely effect that could be achieved by consumers' use of the product, and concluded that the ads were not misleading," the ASA said.

In other words, Dame Helen is really that hot—no digital enhancement needed.

Chelsea Peng I'm Chelsea Peng, the assistant editor at MarieClaire.com.
This content is created and maintained by a third party, and imported onto this page to help users provide their email addresses. You may be able to find more information about this and similar content at piano.io
Advertisement - Continue Reading Below
More From Celebrity
Beyoncé Wore Tweed Micro Shorts for Date Night
Prince Charles Addresses Prince Philip's Death
Advertisement - Continue Reading Below
Prince William Pulls Out of 2021 BAFTA Appearances
J.Lo Wears a Crop Top and Gold Joggers on Set
Prince Philip Said He Had No Desire to Live to 100
JT Is in the Throwback Pic Britney Posted on IG
The Queen Was by Prince Philip's Side When He Died
Prince Harry Is "Really Upset" Over Philip's Death
Will Harry & Meg Attend Prince Philip's Funeral?
The Queen Is Hopeful Prince Harry Will Return Home