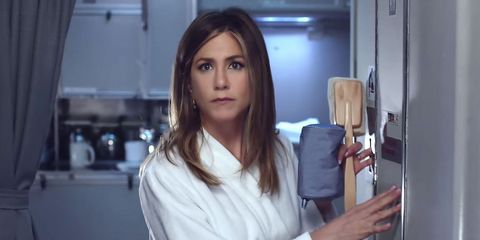 Marital outfit-coordinator Jennifer Aniston stars in a new Emirates TV spot in which she stumbles around an airplane looking for "the shower" and "the bar." But here's the thing: She hasn't had one too many of those miniature bottles of Jack—she's having a shower- and bar-less airplane nightmare!

Lucky for her, economy class is but a dream as she wakes from her restful, fully reclined slumber to her iPad parked on a gold dock. Just in time for an aperitivo at THE BAR THEY HAVE ON THE PLANE™!

Even Kimye kind of flew coach to Armenia, so...