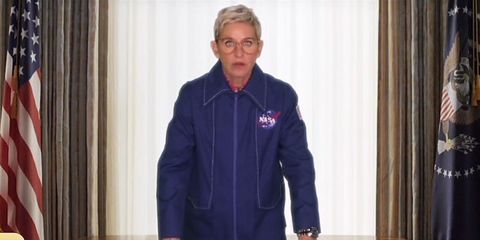 Proving that you're never too old for a good Uranus joke, Ellen Degeneres pulled out the big guns for a trailer spoof like none other. On her show, she joked that Matt Damon's new movie Martian was *so* successful they're already making a sequel—where Matt Damon's character, Mark Watney, is stuck (you guessed it) on Uranus.

In the clip we see a helpless Matt Damon explaining his situation. "Even if I could make contact, it would take eight years for another person to reach Uranus," he says. "So, I'm left with only one option: I'm going to have to explore the surface of Uranus."

Ellen, as the (actually vaguely believable?) head of NASA, orders: "Get me an expert on Uranus!"

Yes, there are lots of mentions of "Uranus."

Watch the full clip thanks to Entertainment Tonight: