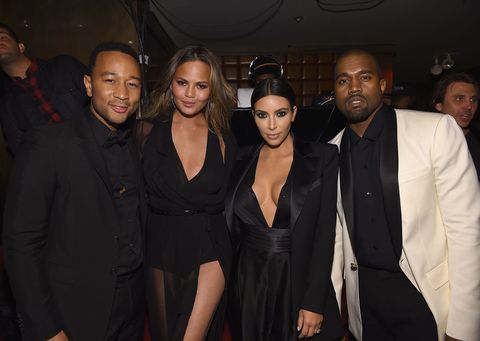 In case you forgot, Kanye West has a lot of debt, according to Kanye West. How much debt? He claims somewhere in the range of $53 million. Given that fact, it makes sense that buddy John Legend made sure to foot the bill on his recent shopping trip for the baby-to-be—even if Kim and Kanye were the ones who took him out.

"[Kim] just showed Chrissy everything a mom would need at this time," Legend said on Jimmy Kimmel Live.

"Now, you say 'took you shopping,' who paid for it? Because Kanye owes a lot of money," Kimmel responded.

The 37-year-old performer also discussed how he'll be donating plenty of the free baby stuff they've gotten to charity, because Chrissy and John are just the absolute best. Watch the video below:

Samantha Leal Senior Web Editor I'm Sam, the senior editor at MarieClaire.com.
Advertisement - Continue Reading Below
More From Celebrity
36 Celebrity Couples Who Love Some PDA
Ben Affleck Is Blond Now
Advertisement - Continue Reading Below
A Timeline of Charles and Diana's Relationship
Kendall Jenner Wants to Work for Beyoncé
Harry & Jon Bon Jovi Sing Together at Royal Event
Khloé Kardashian Is Being Trolled Over Febreze
A 'Friends' Reunion Special Is Coming to HBO Max
Katie Holmes Is in Head-to-Toe Chloé at Their Show
Ariel Winter Now Has Strawberry Blonde Hair
46 Stars Who Dated Before They Were Famous