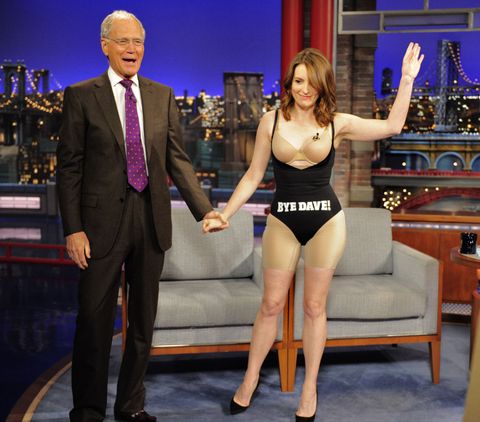 When David Letterman bid farewell to late night television, the CBS powers that be were like "Wow, now's our opportunity to hire a woman!" and that, friends, is why Samantha Bee is currently the host of The Late Show.

LOL, just kidding, none of that happened! Instead, CBS hired Stephen Colbert, a man whose writers' room was originally made up of 19 men and two women. Just, ugh.

While this kind of immense sexism is unsurprising due to #ThePatriarchy, there's simply no reasonable excuse for the lack of ladies on late night TV. Ask David Letterman, he gets it.

"I couldn't care less about late-night television," the former host tells NBC News. "I'm happy for the guys—men and women—there should be more women. And I don't know why they didn't give my show to a woman. That would have been fine."

Preach, David Letterman. And in case you're thinking to yourself, "but Amy Schumer doesn't want to host a show!" please note: there are many other women who do.

Mehera Bonner Contributor Mehera Bonner is a news writer who focuses on celebrities and royals—follow her on Instagram.
This content is created and maintained by a third party, and imported onto this page to help users provide their email addresses. You may be able to find more information about this and similar content at piano.io
Advertisement - Continue Reading Below
More From Celebrity
The Cybersecurity Gospel of Nancy Grace
Meghan Lost the Latest Round of Her Privacy Suit
Advertisement - Continue Reading Below
VB Explained How She Got the Nickname "Posh Spice"
Chrissy Teigen Suffered a Miscarriage
Meghan Said She Was "In Tears" Over Her BLM Speech
Chrissy Teigen Couldn't Hear Her Baby's Heartbeat
Taylor Swift Fans Troll Jake Gyllenhaal on IG
Meghan Shared a Quote She Displayed in Her Room
Duchess Kate Spots Sleek Sportswear for Outing
Brooke Shields, 55, Shows Off Toned Legs On Insta