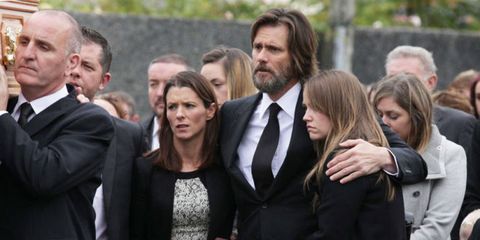 Jim Carrey says a wrongful death lawsuit filed by the estranged husband of his ex-girlfriend is a heartless attempt to exploit him, and he's vowing to fight the case.

Mark Burton of Portland sued Carrey in Los Angeles Superior Court on Monday, accusing the actor of providing the prescription drugs that his wife Cathriona White used to overdose in September 2015. The wrongful death lawsuit contends that Carrey improperly obtained prescriptions for Ambien and the powerful opioid oxycodone under the alias "Arthur King."

The suit accuses Carrey of giving White the medications days before she was found dead in one of Carrey's homes. White and Carrey dated in 2012 and were photographed together in May 2015.

"What a terrible shame," Carrey wrote in a statement. "It would be easy for me to get in a back room with this man's lawyer and make this go away, but there are some moments in life when you have to stand up and defend your honor against the evil in this world."

"I will not tolerate this heartless attempt to exploit me or the woman I loved," Carrey continued. "I really hope that someday soon people will stop trying to profit from this and let her rest in peace."

Burton and White married in 2013. A coroner's official told reporters that the pair were separated and planned to divorce, but Burton's attorney Michael Avenatti declined to characterize their relationship beyond saying they were legally married at the time of White's death. Carrey's attorney Marty Singer wrote in a statement that White and Burton never lived together.

The lawsuit accuses Carrey of violating a section of California's Health and Safety Code against the use of aliases to obtain prescription medications. "White's death was tragic and easily avoidable," the lawsuit states.

Carrey's prescriptions were legally obtained and his doctor and insurers were aware of his alias use, Singer wrote. He said many actors use aliases for prescriptions to protect their privacy.

This content is created and maintained by a third party, and imported onto this page to help users provide their email addresses. You may be able to find more information about this and similar content at piano.io
Advertisement - Continue Reading Below
More From Celebrity
Royal Nanny to Get Damages from Interview Scandal
Prince William and Kate Will Focus on Work in 2022
Advertisement - Continue Reading Below
Kate Middleton Shares Prince Louis's First Words
Prince Charles Shares Final Exchange With Philip
William and Kate's Children Just Love Airplanes
Jennifer Aniston Answered Bizarre Fan Questions
Prince Charles "Really Wants to Meet" Lilibet
Britney Spears Deleted Her Instagram Account
Megan Fox Won't Be Told "What a Woman Should Be"
Jennifer Garner Shared an Emotional Message on IG