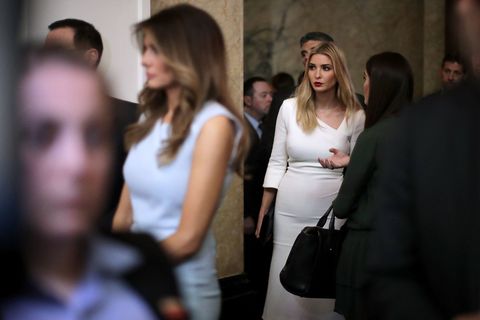 While Ivanka Trump presumably has a whole load of political opinions that have zero to do with Donald Trump, she seems to be suffering the consequences of sharing her controversial father's last name. Inevitable? Yes. Fair? Probably not.

Women are boycotting Ivanka's clothing line by using the #GrabYourWallet hashtag, but she doesn't seem bothered, and says everyone is free to have an opinion.

"The beauty of America is people can do what they like," Ivanka recently said on Good Morning America. "But I prefer to talk to the millions, tens of millions of American women who are inspired by the brand and the message that I've created."

Ivanka also claimed that she's always promoted "advocacy of women," which is a message she's never politicized. "People who are seeking to politicize it because they may disagree with the politics of my father, there's nothing I can do to change that," she explained.

On the one hand, this makes a lot of sense: Ivanka is not her father, and putting his missteps on her shoulders is unfair. On the other hand, she's chosen to align herself closely with her dad's controversial opinions, and her clientele can—as Invanka notes—"do what they like" in response to that.